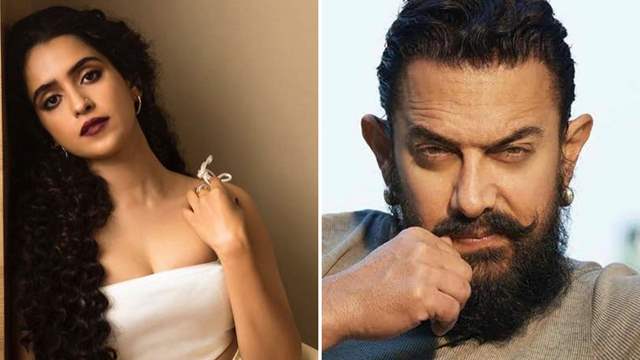 Sanya Malhotra made her Bollywood debut in 2016 with Aamir Khan’s film Dangal. She played the character of wrestler Babita Kumari and impressed the audience with her performance.

While many believe Aamir Khan to be the ‘perfectionist’, his co star Sanya has a different tale to tell.

In a recent chat with ETimes, Sanya offers a different take to Aamir Khan’s personality and says:

“Aamir Khan is not a perfectionist, he is very passionate. I think perfectionist has a very negative connotation, the word itself. I think dictionary mein bhi yahi hai ki it’s not a good word.”

The actress says that while Aamir Khan is very passionate about his work, she gets overly critical of her performance. Sanya says that she might have had the impostor syndrome in the past. She added:

“Aise koi release nahi hua hai jiske baad main apne aap ko ye nahi bolti thi ki you shouldn’t have done this, you shouldn’t have done that. How do I explain this - impostor syndrome kehh lo! Matlab, kaafi logo ko hota hai, woh aware nahi hote hai ki this is called impostor syndrome, maybe I had that. But now I don’t have any! Now I am being nice to myself and not being too harsh on myself.”

Currently, Sanya Malhotra is basking in the success of her recently released film Pagglait.Next up, she has Meenakshi Sundereshwar alongside Abhimanyu Dassani in her kitty. Being a North Indian originally, it's the first time that an actress is taking up the challenge of playing a south Indian character which is the interesting part.

Sanya will also be seen in Love Hostel alongside Vikrant Massey. The film is slated to be a crime thriller and directed by Shanker Raman, who is best known for his film Gurgoan.

Shruti Sharma on working with Sanya Malhotra in Pagglait, stereotypes ...

Sanya Malhotra reacts to being nominated in Critic's category as the ...