Mumbai, April 8 (IANS) Yet another twist has been added to the turbulent relationship between Bollywood actor Sanjay Dutt and Manyata with the couple telling a Mumbai court that they are not 'legally married'.

Challenging the allegations of bigamy levelled by Manyata's first husband Meraj-ur-Rehman, the couple told a Mumbai court that there was no material to show the validity of their marriage in the eyes of the law, Dutt's lawyer Rizwan Merchant told IANS. 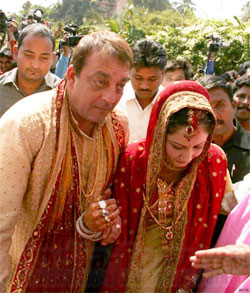 Earlier, Dutt and Manyata were granted a reprieve till April 23 when the Mumbai Sessions Court stayed the proceedings against them by the Bandra court.

Meeraj-ur-Rehman filed a petition in the Bandra magistrate's court that his marriage with Manyata has not been dissolved and he is still legally married to her.

The sessions court also stayed the proceedings at the Bandra court and called for the records of the case. It has posted the hearing of the revision application April 23.

The Bandra court March 11 ordered issuance of process against Dutt and Manyata, observing that their marriage was illegal.

The order was passed following an application filed by Manyata's first husband, Meraj-ur-Rehman, claiming that he is still legally married to Manyata.

Dutt and Manyata had a court marriage in Goa Feb 7.