View Profile
Love is bound to be in the air when Bollywood's one of the most gorgeous real life couple Rishi Kapoor & Neetu Singh (Kapoor) will come together on the sets of Amul Star Voice of India, this Friday, Sept. 21st, 9.00pm only on STAR PLUS! And for those of you, if this isn't not enough then get ready for something very special…. this Saturday as Amul Star Voice of India will present a visual treat for all action lovers as none other than Bollywood's one & only 'macho man' Sanjay Dutt will set the floor on fire… So get set to get & give your 'Jadoo Ki jhappi's '.

Abhijeet & Alka Yagnik gives a kick start to the special evening with the Golden oldie 'Khullam Khulla Pyar Karenge' as the evergreen couple joins them on stage & shares the secret of their vigor & verve and their successful married life. This sets the stage for the Amul Star Voice of India finalists to carry on with their singing rally. Ishmeet as usual with his sweet voice presents the song 'Main Shayer to Nahin' while Rishi comes on stage & tries to create his singing spell on Neetu by singing with Ishmeet. Neetu finds Ishmeet's voice very adorable & perfectly suitable for their debutant son Ranbir. Lucknow ke Meet, Harshit sings Rishi's very popular number 'Bachna E Haseeno'. The couple likes his performance & Rishi shares some of his industry experiences. Abhilasha wins over accolades from both Rishi & Neetu with her energetic performance on the peppy song 'Ek Mai Aur Ek Tu'. The couple gets nostalgic recollecting their shooting days on the sets of this song.

The wonder boy Abhaas overwhelms the entire crowd & receives standing ovation from Neetu Singh on his excellent performance of the famous quawaali 'Hai Agar dushman'. It brings tears to Rishi's eyes as the song brings back many sweet memories to his mind. Irfan sings 'Parda Hai Parda' while he gives a rose to Neetu & bring her on stage & makes her dance with him. Neetu dances to Irfan's tune with a dupatta on her head which gears up Irfan's enthusiasm & the rhythm of the song. Last but not the least Sumitra dresses up exactly like Neetu Sing in the song 'Lekar Hum Deewana Dil' & performs to that song with equal enthusiasm & expression.. Neetu & Rishi like her performance a lot. And those 'Once More…. Once More' cheers compels Neetu to shake a leg while the young performers of Amul Star Voice Of India could not take their eyes off her stupendous performance!

Love will still spread further with the famous 'Jadoo ki Jhappi' as Sanjay Dutt marks his presence as a celebrity guest of Amul Star Voice of India on Saturday. With his crooning on Aye Shivani…. Audience go crazy and as he shakes a leg on the stage….there was no stopping to it!!!

So put your dancing shoes on with your loved ones as Love & Music will make this weekend a perfect entertainer for one & all. 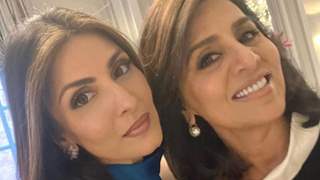 14 years ago That will be fun to watch...will have to catch it this weekend.

+ 5
14 years ago Thanks for the info, waiting impatiently for Fri - Sat.

+ 3
14 years ago Can't wait to see Irfan and Abhaas. Thanxx for sharing the wonderful article. The pics look great :)