In his petition, filed through advocate Karan Singh, Dutt also pleaded for his release on bail, p 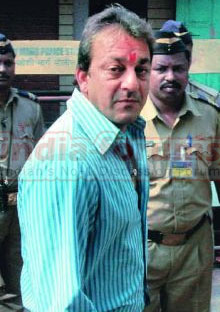 Featured Video
ossibly by the upcoming Diwali festival, pending disposal of his petition challenging his conviction in the case.

Detailing some of the major grounds to challenge Dutt's conviction, Singh told IANS: 'We have challenged his conviction on the grounds of illegality in extracting his confession, regarding possession of arms by him.'

Dutt has challenged his conviction on the grounds that he could not have been convicted on his confessional statement for possessing weapon, which he had retracted later, Singh said.

Dutt was sentenced July 31 to six years' imprisonment following his conviction for possessing an illegal firearm, which he had destroyed later in the wake of raids by investigative agencies during the probe into the 1993 Mumbai terror blasts.

He was taken into custody soon after the delivery of the verdict by the Mumbai anti-terror court of Judge P.D. Kode who, however, had failed to hand over the copy of his detailed judgement to Dutt and other convicts.

The Supreme Court on Aug 20 granted him a major succour, freeing him temporarily along with five others till the delivery of the copies of the detailed, reasoned judgement convicting them.

The Mumbai court gave the copy of the judgement Monday, when Dutt was again taken into custody and lodged in Pune's Yerawada jail.