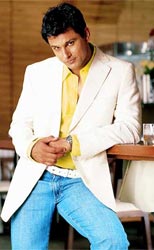 We had reported earlier that there will be a love triangle seen between Prithvi (Gaurav Khanna), Damini (Chandana Sharma) and another guy as the story moves on. Sandeep will be playing the role of Inder who happens to be the fianc of Damini.

Confirming this news, Sandeep told Telly Buzz, "I play Inder who is cast opposite Damini. The character is very positive; he is the perfect lover boy, who is classy and flamboyant".

When asked him about the track, he said, "I can't divulge much, all I can say is that my role is long running and is also very important to the story line. My entry has been shot in a real cool and classy way".

Love Ne Mila Di Jodi launches tonight at the 9.30 PM slot on Star One. Sandeep's entry will be aired in the third episode…

The story which is about three brothers and three sisters also has new faces Karan Tacker, Dishank Arora, Parmeet and Simran in the show...

+ 4
13 years ago This serial is however not better than dmg or mjht....anyways-good luck!!

+ 4
13 years ago Uh-oh...Inder...
Well, one good thing is that he's a good guy! If he's the perfect lover boy, then what about Prithvi? Aww, man. This is really interesting!

all the best sandeep for this Role

+ 6
13 years ago yipeeee
i was waiting for the time when i will see sandeep in another... loved him in kareena kareena..

I wish he would play the lead in some show!!!!

+ 3
13 years ago dont know him but gaurav the lead is better..looking forward for tonite

+ 6
13 years ago omg.. i remember him...i used to watch KK...hmmm....after a really long time...
just got another reason to look forward to Prithvi Demini track