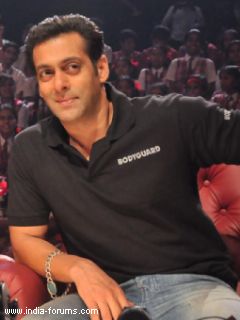 Mumbai, Sep 16 British Indian actress Hazel Keech, who made her Bollywood debut with blockbuster 'Bodyguard', says Salman Khan never revealed that he was suffering from pain while shooting for the movie.

Salman left for the US before the film could hit the screens and underwent an eight-hour operation in Pittsburgh for a nerve problem that was causing exruciating pain in his head, jaws and cheeks.

'The operation went off well, but the pain is still there so he would be going for another operation. But even if he is in pain, he is never going to speak of it. He is such a brave person,' Keech told IANS in an interview.

Hazel flew down to Mumbai from London with stardust in her eyes, but gave up all hopes of making a career in acting in India. She was returning when she got the 'Bodyguard' offer.

'I was not getting any work, so I was planning to go back to London. The day I was about to leave, I got a text message from Atul Agnihotri and he asked me to meet him. I met him, we spoke for over two-and-a-half-hours and then he selected me,' said the 24-year-old, who has worked in Tamil film 'Billa'.

Salman, who she had met in London while he was shooting for 'London Dreams', had passed on her number to Agnihotri who has co-produced the blockbuster with Reliance Entertainment.

Hazel started her career as an actor at a very tender age by doing small roles in Hollywood films. She worked in three editions of 'Harry Potter'.

'I am with the entertainment industry since the age of 12. I used to do small roles in Western films. When I was in school, I did 'Harry Potter'. Gradually, I started getting bigger roles. I worked in the second, third and fourth editions of 'Harry Potter'. I played one of the students,' said Hazel.

Though she's a second lead in Salman-Kareena Kapoor starrer 'Bodyguard', she is happy she could exhibit her acting skills.

'Technically, I was the second lead but the story is such that I am there in almost 80 percent of the film. It was such an important role,' she said.

Born to a English father and an Indian mother, Hazel came to India five years ago and easily gelled with the culture here because as she says she grew up in a very traditional Indian home, courtesy her mother and grandmother.

'My mom is a Hindu and my nani (maternal grandmother) who stays with us there, is very traditional and wears sari every day, does pujas. So, eventually the culture at home was totally Indian. When I came to India, it's just a different country but the culture was same that I grew up in,' she said.

She has only one regret -- her name was changed to Rose Dawn by the first modelling agency she had worked with.

'I am born as Hazel. Rose is not my name. When I came five years ago, the modelling agency I started with decided to change my name. They changed my name to Rose. I left that agency after a year. I never changed my name or spelling after that,' said Hazel.

Asked if she would continue doing both western and Indian films, she said: 'I am an actor. Wherever I'd get to do my craft, I'd be doing. I won't restrict myself to any one language or genre.'

They Kept Denying It But Kriti Sanon Was Dating Sushant ...
32 minutes ago