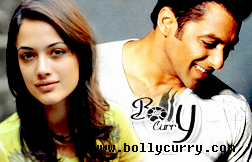 Calendar may now be seen on the big screen opposite Macho Man Salman Khan.

Apparently, Sohail Khan had been looking for a hot model to star in his next Sher Khan and Angela seemed to fit the bill perfectly!

Initially, the gal was to debut in Dhoom 3 with Aamir Khan but the deal fell through!

Meanwhile, there is a possibility that composer-turned-actor Himesh Reshammiya who patched up with Salman Khan after their fallout, may also star in the movie.

If her chemistry with Salman works out well in this movie it would be the best debut Angela could ask for!