He might be known as the Bollywood brat, but it looks like Salman Khan is now trying to turn a new leaf. He says he is trying to quit smoking. 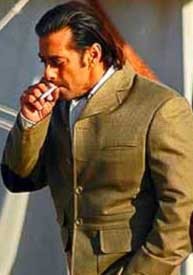 Featured Video
Asked about the habit that is hard to kick, he said: 'I'm trying to (quit smoking)... Smoking is something people start to either enter a social circle or to show off.'


But he does have a word of advice for others trying to quit cigarettes too.


'Once you quit, there are also chances of picking it up again because when you find people around you smoking, you join them to be with them. But it slowly and slowly kills you and people stop only when they are advised by the doctor. So everyone should quit it before reaching that stage,' Salman said.


90 percent of my popularity is thanks to TV: Farah Khan


'Small screen is not small any longer. I think it's a larger medium than cinema because even though a village may not have a cinema hall, the people might still have a TV set. I think if I have become a popular figure, its almost 90 percent because of my presence on television,' said Farah.


The filmmaker, who has directed movies like 'Main Hoon Na' and 'Om Shanti Om', says though she enjoys working for TV, she doesn't like getting decked up for it.


'I really enjoy television. The only part I don't enjoy is doing my make-up and hair and sitting for hours and I also don't like looking fat on TV. Other than that, I like everything about it,' she said.


'Prosenjit is a senior and a very nice human being. He made me feel very comfortable for scenes that we did together. On the other hand, Jishu was somebody I could really get along and joke and laugh with, as we are from the same age group,' Bipasha told IANS.