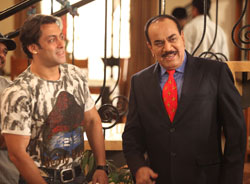 Salman Khan is a man who fights for a cause, and this time around he voices his opinion against PIRACY. The actor will be seen with ACP Pradyuman and his team on Sony Entertainment Television's longest running show CID.

According to our source, "He will be seen in CID along with the cast of his upcoming flick, WANTED: Dead or Alive. The team gets the news of pirated copies of his to-be-released film making waves in the market, and Salman Khan joins hands with them to catch the culprit".

Salman plays himself in the show, and will help in nabbing the culprits, and also will send out a strong message against piracy to the audience.

Tune-into one of the most exciting episodes of CID with superstar Salman Khan, this Friday at 10.00 p.m. exclusively on Sony Entertainment Television.

+ 4
13 years ago its compulsory for me to watch CID every week.
I love this show and this time its gonna be really very interesting.

+ 2
13 years ago cool..thats a nice concept to show for a change

+ 6
13 years ago the only serial whch till nw has maintained its dignity n entertainmnt elemnt, gr888 salman in cid