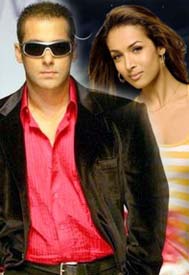 Surprisingly Salman Khan and Malaika Arora have never shared screen space before, let alone performing on an item song together!


However the latest buzz in B-Town is that Malaika will be setting the screen on fire with a song-and-dance number similar to her "Chaiyyan Chaiyaan" with Shah Rukh Khan.


Choreographed by none other than Farah Khan, the item song will be seen in Director's Abhinav Kashvap's upcoming Dabangg.  Arbaaz Khan, also the producer of the movie, confirms that Salman and Malaika will be performing the item song together.


Dabangg is slated for an Eid release and debuts Sonakshi (daughter of veteran actor Shatrughan Sinha) opposite Salman who plays a corrupt UP cop.
Featured Video