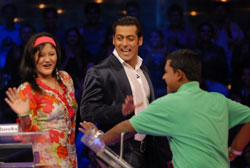 Salman Khan is dancing away to glory in Sony's 10 ka Dum and so are the contestants who get to meet him!

The great dancer, entertainer and the perfect host is surely the man in demand but this time, Romita Sharma, an event manager from Assam took over from Sallu mia and performed a jig on Salman’s hit song ‘Hi Rama Rama Ho’ from the film Lucky. After this was the student Sushant from Orissa who danced on ‘Soni de nakhre’. Well, Salman left no stone unturned as he put up a request to Sushant to teach him few steps from the traditional folk dance of Orissa; and the young lad was very much obliged to dance with the star yet again!!

Catch the fun and masti on 10 ka Dum this Friday at 9.00 pm only on Sony Entertainment Television.

14 years ago awwwww yesss !
my all time fav actress is back !
i loveee her !

Juhi is an awesome actress glad she's back!

+ 2
14 years ago jus LOVE salman khan to bitzzzzzzzz! he is simply the BESTTTTTTTTT! xxxx

14 years ago can't wait to watch. Salman is the best