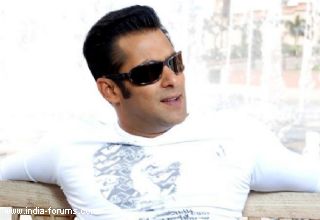 After a series of high-octane action flicks, superstar Salman Khan is now back to where he belongs! Confused? Well, without further ado, our favorite Prem is now back and how!

Since last year, fans and followers anticipated a full-fledged romantic-love story with their favorite Salman Khan when he agreed to make a friendly gesture for Rajshri Productions' Isi life mein. Now, that he's done and over with action films, Salman has reportedly signed a mushy-cute-Salman-style love story with his favorite director Sooraj Barjatya.

Sources state that the official meeting took place in Salman's apartment, last week. The movie is expected to be similar to his earlier romances like Maine Pyar Kiya, Hum Aapke Hain Kaun and Hum Saath-Saath Hain and no points for guessing this one - Salman will be called Prem.

The film will apparently have a single female lead and evidently, Salman will help in finalizing the actress. In fact, he's already been giving inputs to the script Barjatya is currently penning.

Apparently, the film maker maintained his distance from Salman once he got involved in the black buck killing case that took place at the time. Since then Barjatya's movies Main Prem Ki Diwani Hoon and Vivah haven't got the success that matched the film maker's stint with Salman.  He wanted to bounce back in the industry and that meant casting Salman, the ideal 'Prem' of B-town.

The film is slated to hit the screens in mid-2012, meanwhile let's cherish Prem Suman, Prem Nisha and Prem Preeti for a while!