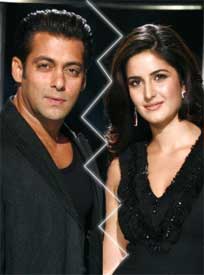 Salman Khan's personal life has been under scanner ever since he broke up with Aishwarya and linked up with Katrina. His on and off relationship with Katrina has always been under the public eye.


This time there seems no room for patch-up. Salman has not only removed Katrina from his heart but also from his house too.  All of Kat's belongings in Sallu's apartment have shown the exit as he does not want to move forward with Kat's memory.


Salman was a possessive boyfriend and very often he got onto Kat's nerve for the very reason. Apparently, he wanted to tie the knot with Kat. Kat, however, is enjoying success on the career front and isn't interested in marriage. After repeated Salman's proposals and Kat's refusals, the duo drifted apart. And this led to the inevitable break-up.