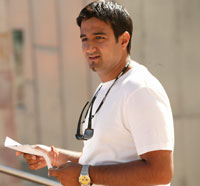 
Being with Yash Raj camp Siddharth has made many good films like 'Salaam Namaste' that starred Preity Zinta and Saif Ali Khan, then 'Ta ra rum pum' with Saif Ali Khan and Rani Mukherji and last was 'Bachna Ae Haseeno' along with Ranbir Kapoor, Bipasha Basu, Deepika Padukone and Minissha Lambha. Now it seems that his contract has come to an end with Yash Raj and its time to say bye to them.


As known the director is roped in to direct a movie for Sajid Nadiadwala. The details of the film is yet to be announced.