The teasers of Shashi and Sumit Mittal's new show on Star Plus, Sajan Ghar Jaana Hai are on air, and the latest development is that the show will be launching on 27th July, 2009.  The show will be a fresh love story; the leads being fresh faces, Neha Saxena and Kunal Bhatia. The show will also see the comeback of Vidya Sinha to television. Others in the cast include, Abigael, Sanyojita Bhave, Tushi Sharma etc. 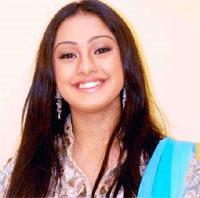 Featured Video
According to our source, "27th July seems to be finalized for the launch of the show, but not much is clear about the time slot to be provided".

However, future of three shows on the channel seems to be in jeopardy right now!! According to our source, "There is a buzz that the show might take up the time slot of either 8 PM, 8.30 PM or 10 PM. This only means that the future of Raja Ki Aayegi Baraat, Kis Desh Mein Hai Meraa Dil or Sabki Laadli Bebo is at stake".

According to the ongoing story line, all the three above stated shows have a crisp and new track running; so there is a high chance that one of the shows will be shifted to the afternoon band to accommodate Sajan Ghar Jaana Hai.

Says our source, "Since Sajan Ghar Jaana Hai is a high budget show, with a large set erected at Kurukshetra it is very unlikely that the channel will give it an afternoon slot instead of a good prime time slot".

A source from Raja Ki Aayegi Baraat says, "We are working on a new track which has begun just now, and we have a long way to go. I have not heard of the show going off air or getting a change in time slot".

Moving to Bebo, the buzz is strong that the show which opened with a great rating has not lived up to its expectations, and if there is no improvement in the TRPs, the show might be shifted to an afternoon slot.

But our source from Bebo denies the news and says, "No, we have not heard of anything like this".

Lastly, speaking of Kis Desh of Balaji Telefilms which has recently taken a six year leap, the show is now moving towards a fresh new love story of Heer and Prem with the entry of their little daughter, and there is no way in which the show could go off air right now!!

However, if sources are to be believed, there is a high chance of Kis Desh being moved to an afternoon slot.

An actor from Kis Desh on terms of anonymity also hinted to the same, saying "We have been hearing that there is a possibility of Kis Desh moving to an afternoon slot. But nothing is finalized as of now".

If sources are to be believed, Siddhant Cinevision's Shraddha will be the next launch on Star Plus after Sajan Ghar Jaana Hai. But the question mark with the time slot prevails for this show too. Earlier, it was reported that Shraddha will be put in an afternoon band, but there are chances for the show to take up a prime time slot too.

As of now, let's leave it to time and see which existing shows get the axe at the cost of the new shows coming in!!

13 years ago ths shw is nt evn tht gd! its ok the stry line and all tht bt the hero and heroeine cnt act!!!! kis desh is the best! ths cnt replace it, nvr!

+ 2
13 years ago I HATE STAR PLUS they only think of tmings and not when people will usually watch it why cant they make a slot for sajanghar jaana hain on sony there always showing reapeat. kis deshians need to do something where going down.

ankita1 13 years ago the news is very bad that new show is replacing kis desh .sp is very bad and partial by this it had prove that it dose care what the fans want very bad sp it is just a shocking news

13 years ago Why do I have a feeling that this is a lil' rip off from Zee's pathetic show Choti Bahu -_- ??

+ 3
13 years ago this show is going to be a great flop cursing sp seriously.

13 years ago Star Plus know that we do not want any time change for KDMHMD. It is one of the best shows on SP therefore Pls please wake up and treat this show with some R.E.S.P.E.C.T.

+ 3
13 years ago star plus better not move kis desh mein hai mera dil to the afternoon slot...star plus is simply ridiculous if they do...nothing can replace kis desh....it will always be the best show