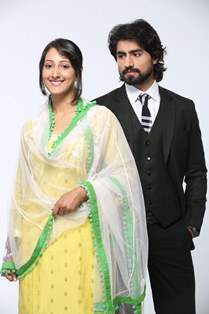 Four Lions Films' show Humsafars is slowly and gradually making its place in the hearts of the viewers and also the chemistry of Sahir and Arzoo is liked by the viewers.

According to the last few episodes Sahir gives a task to Anam (Payal Rohatgi) of designing and to complete her task she steals Arzoo's (Shivya Pathania) designs. When Sahir shows these designs in front of everyone Arzoo tells him that those were her designs but nobody believes her and Seher instead accuses her that she is lying.

An interesting twist is in store for the viewers. Revealing about the same our source says, "In the upcoming episodes Sahir will come to know that Anam has stolen Arzoo's designs and he feels guilty about it. So he decides to apologize for the same and as he has never said sorry to anyone he starts practicing about the same."

Adding further our sources say, "Meanwhile Arzoo comes and starts blaming Sahir, he instead of apologizing gives her a challenge that if she thinks that she is too smart then she has to sell all the clothes in short span of time. Arzoo does it by using all her convincing skills."
Will the differences between Arzoo and Sahir will be sorted ?
To know more keep reading the above space.
Phalguni Sharma
144 Likes

aminaz 6 years ago Loving you as Sahir Azeem Chaudhary
Harshad Chopra you are the best!!

ratij 6 years ago You are amazing as Sahir Chaudhary
Harshad Chopra :)