New Delhi, Jan 21 (IANS) Chriselle Almeida, who plays a lesbian in the film 'When Kiran met Karen', is not fazed by the possibility of her role eliciting shock and anger from the Indian audience.

'Safe is no fun!' Chriselle told IANS in the context of films on lesbianism raking up controversy in the country.

Playing a character that is slightly 'daring, unsafe and not a stereotype' is fun, explained the actress, a Goan who was born in Mumbai and raised in New York where she moved at the age of 14 and earned a full scholarship for the acting programme at the University of California at Los Angeles.

'I was so excited by the script where an Indian actress was not portrayed in the usual conventional way. The controversial subject drew me to the character and made me wary of it,' Chriselle said.

The movie is about a Bollywood starlet Kiran who discovers her 'sexuality' after an affair with a Chinese woman. Chriselle plays Kiran.

Lesbianism as a theme has always intrigued new age filmmakers, and the release of Manan Katohara's 'When Kiran met Karen' is being awaited with bated breath.

The film, which is still on the floors, is expected to hit the theatres mid-2008.

Several filmmakers have attempted to portray love between two women on screen but ended up courting controversy. Deepa Mehta's 'Fire' in 1996 triggered protest asnd Karan Razdan's 'Girlfriend' in 2004 did not go down well with the audience and the government.

So, what kind of reaction is Chriselle expecting from the audience?

'I would like to think that we live in a more progressive time and that the average Indian audience would accept the theme of the film, but realistically speaking, I think that there will be an uneasy feeling among the audience,' she said.

Chriselle had no inhibitions playing a lesbian or being condemned for breaking social conventions. 'It is a character I am playing. Would I not play the role of a murderer fearing that people would think badly of me? It is silly to look down or judge an actor for taking on complex characters, be it gay or 'unconventional' in any way,' she said.

According to her, Perizaad Zorabian, who had turned down the offer to play Kiran in the film, should not be blamed. Chriselle feels that living in India and doing a movie like this is quite different from living abroad and playing a lesbian.

Chriselle feels strongly about Indian women who fear to admit their homosexuality for fear of being dogged with criticism in society.

She believes that people who frown upon homosexual relationships do not see that 'it is not about them'.

'It is about what a human being needs to feel 'right' with themselves. I agree that it is not easy to justify what you want in life. I can only hope that it changes for the better for homosexual Indian women with time and hopefully, with movies like this!' Chriselle added.

She explained that the film tries to convey that unexpected things can happen and can change our life and it is up to us to decide whether to follow our heart or be 'sensible'.

'More than conveying a message, the film throws up questions that the audience must answer,' Chriselle said.

Previously seen in Jonah Freeman's 'The Franklin Abraham' in 2004, Chriselle wanted to make one of her favourite books, 'Skin' by Margaret Mascarenhas into a screenplay. She has recently been given the permission to do so and she is upbeat about it.

'I am excited about writing the screenplay and bringing my personal heritage to life in an artistic fashion!' she said.

In future, Chriselle hopes to enact the roles of under-represented Indian women who are real and beautiful and wants to tell stories that people do not know or maybe want to know. 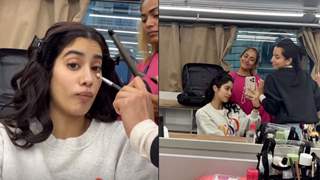 Janhvi Kapoor preps for day 45 of Bawaal shoot; engages fans with a ...