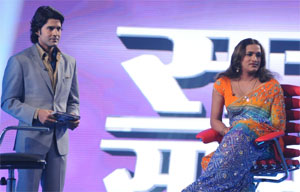 Sach Ka Saamna has witnessed many startling truths of celebrities and non-celebrities, but the upcoming episode has quite a hatke personality Laxmi Narayan Tripathi. A renowned activist Laxmi, an epitome of grace and courage faces the truths on the show with much aplomb. Watch the soul stirring and inspirational episode of  a person who defied the conventional norms and tread her own path, this Wednesday, Thursday and Friday, August 26th, 27th &  August 28th @ 11.00pm only on STAR Plus.

Does anyone in your family address you as a man when you are at home and as a woman when you are in public? If it was your parent's dying wish would you leave the hijra community and live as a man? Laxmi faces a volley of questions from the courteous host Rajeev Khandelwal and emerges a strong willed person who has risen against all obstacles in life.

Spokesperson for the kinnar community, Laxmi reveals a lot of truths about the life that the members of the kinnar community lead. A confident and articulate Laxmi, outpours the struggle she had to go through in life and how she emerged as a strong personality of guts and vigor. Sach ka Saamna brings to the fore the multifaceted persona of Laxmi, from running an NGO named Astitva to standing up for the rights of her community, Laxmi accepted herself as she is and worked her way to carve a niche for herself.

Will Laxmi's truths change the people's perception of the Kinnar community? Will Laxmi have enough strength in her to climb her way to the top? Will her revelations let down her family? Watch the courageous Laxmi on Sach Ka SAAMNA on Wednesday, Thursday and Friday, August 26th, August 27th and August 28th at 11pm only on STAR Plus.

Anupamaa: Paritosh and Kinjal's wedding festivities to witness a major ...