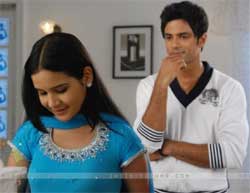 Prime time slots are wanted by every show. However, it's the audience and the TRPs that usually decide it. The team of Star Plus' Sabki Laadli Bebo is now under immense pressure to garner decent TRPs or lose out on its 10 pm space.

According to our source, "Since the time Bebo's lookalike has come up in the show, the TRPs have gradually fallen down. It is therefore assumed that this story track is not appealing to the audience. The SLB creative team will most probably chuck the look alike of Bebo and concentrate on Bebo - Amrit romance track. This is their last ditch effort to save the show its spot."

Adds the source, "Apparently, Ekta Kapoor is vying for the 10 pm slot for one of her upcoming shows. Her interest only makes matters worse for the show. Her show Sarvagunn Sampann on Imagine is slated in the 7 pm slot, a first for Balaji's any show. The production house was not very happy when Imagine chalked Sarvagunn Sampann in for 7 pm. So Ekta's impatience to reign the prime time slot, at least on another channel is immense."

"Sabki Laadli Bebo has been given a deadline of around mid- May to improve the TRPs or give up their time slot," the source further adds.

However, the source clarifies that the show will definitely not go off air. The source says, "Sabki Laadli Bebo recently got an extension. So it will not go off air inspite of uninteresting TRPs. Just get a new timing."

We tried contacting Anuj Sachdeva (Amrit) and Shivshakti Sachdev(Bebo). But, both remained unavailable for comments.

rheasinha 10 years ago thank god this track will end.but the track was interesting but stretched for too long.

QueenAnnie18 10 years ago i agree with aree. they should show Amrit and bebo on screen relationship progress with some good moments. i am fed up of this raano track.

aree 10 years ago the only eye candy in this show is bebo n her innocence.......... they should nw start a track showing bebo getting pregnant and all bebo n amrit's family pampering her like a true laadli it would b nice to see:)

zara_11 10 years ago Noooooo,it's a good show but nowaday's i only watch like 1 or 2 episodes of SKLB in a week. Atleast it won't go off air but it should get more trp's.

ruexangel 10 years ago Thank goodness....
they storyline with Rano has been stretched to the point of breaking our patience :P, absolutely irritating and non-sense.

Yuvika_15 10 years ago horrible show, if it is shifted to the afternoon slot, eventually it wil b pulled off air...thts wt happened with the others.. kis desh and tujh sang....