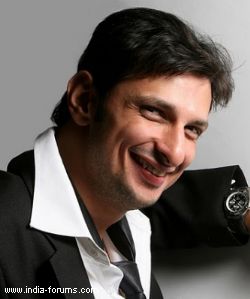 Rushad Rana has got a double break and will be seen in two popular shows on television. The actor will replace Sahil Anand who played the character of Akshay in Star One and Beyond Dreams' Rang Badalti Odhani. On the other hand Rushad has turned second time lucky as he gets into Zee TV's Sanjog Se Bani Sangini.

Wondering why he is second time lucky? Rushad was the original choice to play Iqbal Khan's elder brother in Sangini however bad luck struck and Rushad was down with Malaria exactly when the outdoor shoot for the show began. This left the production house with no choice but to replace him. Harsh Khurana later bagged the same role. Now destiny smile once again on Rushad as he gets the same role yet again.

Our Source tells us "Harsh Khurana is busy with a film, and this prompted the production house to get back their original choice to play Iqbal brother."

In Rang Badalti Odhani play Akshay which was till now played by Sahil Anand. When contacted Rushad Rana confirmed the reason for a double treat and said " yes I am doing both the show my character is very positive, mature. Akshay is a guy who loves his wife a lot. The coming track will focused on both on them. The character I play in Sangini is complexly contrasted; I play a guy who is calculate, money minded and strict".

As for Rushad, we are sure that he would enjoy his double treat.

-Veena- 9 years ago Rushaddd.. Love you!! Loved you as Akki.. and missing you.. hope to see u again soon!

SHANAKFAN 9 years ago he did great as akshay...n really missing him...hoping get to see him very soon...

-Simple- 9 years ago Missing him in Odhani. Hoping to see him back soon !

Sairaaaa 9 years ago Miss you in RBO.Hope you come back soon.

tofeeees 9 years ago Miss him a lot in Odhani he was the bestest brothre in the world and hope he comes back soon! Love you Rushad &lt;3

-Simple- 9 years ago He so totally deserves the 2 roles. Is rocking as Akshay in Odhani !

-Manita- 9 years ago Akshay was perfectly played by Rushad ...miss him in RBO...hope he returns back in full form soon !!!

-chocaholic- 9 years ago Love Rushad as akshay, he is doung a gr8 job, he outdid everyone when RBO went episodic for a while.

SHANAKFAN 9 years ago he is really an amazing actor...n he portray akshay awesomely...