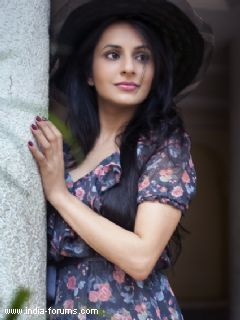 Roop Durgapal who essays the character of Sanchi in Sphere Origins' popular show Balika Vadhu on Colors has been absent from the show from quite some time now because she was down with chicken pox.

Now, the actress has recovered well and she is back to her shoot from today after a gap of around 2 weeks.

Roop told TellyBuzz, "I am getting back to my shoot from today and it feels awesome. I am feeling like I have got my life back. In the morning, I was not even feeling like eating something or reading newspaper with green tea which I do every day. I was just waiting for the time to come when I will rush to my sets to resume shooting. I last shot on 22nd April and some scenes of mine were shot incomplete. So, I have no idea whether they will complete those pending scenes of mine today or I will have to shoot something new."

She further added, "After 2 weeks I went out for dinner last night and I visited one restaurant but it was shut and the same happened with the second one too. When I visited the third one, I came back as there was too much of pin drop silence with no music and I really wanted to celebrate my recovery so I finally went to another restaurant very late at night and had lots of food."

"I really wish that this kind of illness shouldn't happen to anyone as it affects health badly," concludes Roop.

metronome 6 years ago Can't say I missed Saanchi, but being ill is bad :( Take care, stay safe, and stay fit :-)

Bobbi. 9 years ago Agreed with Minisha Lamba and Kunal Kohli.

This entire news burst was to get people's attention off the Royal Wedding.

&& if world Terror extremist can be found dead, then why not the people who were behind 26/11 Taj bombardments? xx
How low will American's stoop?!

Priyanka.chopra 9 years ago It's pretty good that he's dead,
many people lost their lives because of him!-

if u lost someone near and dear to you cuz of that monster, you would understand why it matters so much and why we are happy and feel as if justice is achieved! someone who destroyed so many lives and families is now rotting under the sea. it means a LOT!

SimplyAparajita 9 years ago Neither did i appreciate osama's act of 9/11 nor did i ever appreciate bush attacking afghanistan and iraq. Though i an supporter of obama! I feel sorry for all those who have suffered because of this massacare. Hurting others for your self or proving your self in front of other is called a barbarous act in my dictionary! And for god sake all the people stop using word "pakistanis" as whenever every one use this world i feel horrible. I am a proud indian but i have my bff in pakistan and i love her to core. If you ever wan2 blame someone in pakistan then blame pakistan government, ISI, taliban, and all those sinners who use words like "zehad" and "islam" to justify the dirty acts they commit. Hate all those terrorists who justify their dirty acts by hiding behind the holybook. Though they dont know whether the book is Quraan or its Geeta or its shri Guru Granth Saheb Or its Bible. All the books lead to one road that is humanity! Long live humanity! Long live peace! JAI HIND

rinku4u 9 years ago Mr. Bhatt u seriously need a mental treatment ! being a celebrity .. does it mean one can throw up any thing meaningless nonsense ?...miss lamba ... & mr bhatt... are u really so called celebs ? ... i doubt ..really doubtful .. sply after reading ur rubbish comments !... Mr. Bhatt doesnt leave any chance to do publicity of any bhatt venture !

tanvismile 9 years ago shaf-u said we should not become bad like him ,god will teach him lesson but what if he kills more 3000 people we cant wait for god ,it is matter of 3000 lives.

-DulceMaria- 9 years ago What disturbs me most abt the comments made below is the absurd show of sympathy for this mass-murderer.
@shaf13: how did u know that he told his friend to kill him if he ever gets caught??? and if it is true u r taking ur hatts off to him? this is not bravery, this is cowardice, he knew he deserved all the humiliation and torture and he wasnt brave enough to face it so he chose the easy way out. If he was so sure that watever he did was right why didnt he surrender himself?? why did he let all those innocent ppl to die in afghanistan?? why didnt he let god decide the punishment for america?? it is very easy to say that he wasnt behind 9/11 coz u didnt see it happening. we did, we saw the city change in one hour, he felt the pain, the despair drifting through the air.
& abt his burial well he doesnt deserve it just like all who died in 9/11 attacks didnt deserve to die.

dazzlingflora 9 years ago @shaf13: Allah has given us the power of punish the sinner with the shariah'. If we only depend that Allah will punish them then the sinner will roam around and will make sins and will make innocents life miserable. Thats why Allah have said us to punish the sinner according to the shariah law. So,that mean we have to punish the sinner. And what Osama done was a bad sin. He said he done that for the sake of Zihad. Killing innocent is not Zihad at all. Its against Zihad. For him now we muslims are called Terrorists. And what Americans did that was bad also. Maybe he is a terrorist. But the should buried him with all the islamic formalities rather than throw his body in ocean. After all he is a human.