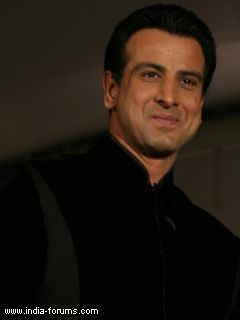 Ronit Bose Roy will be seen in an episode of Bade Ache Lagate Hai. He will make an appearance as Superstar Ronit Roy in the party where Ram Kapoor and Priya (Saakshi Tanwar)are present.

In the track, Priya introduces herself to Ronit and tells him that she loves his show, Adaalat. She also compliments him on the manner in which he has maintained himself. Off-screen, all three of them hung around together, cherishing the memories of the shows they did together earlier.

The episode will be aired tonight.

9 years ago What fantastic jodi we have in RAYA!Ronit looked dashing and debonair in that black suit ..when he made an appearance in the show

+ 4
9 years ago Fans of stupid guys who don't know the A B C of acting, always post negative about the best ones.

Truth is hard to accept!

Btw, how many so called actors have been able to stay even 4 years?

9 years ago highly overrated and his acting is v much like in the rest of the soaps. no offence to fans but i dont mind a 100 dislikes to my comment. truth hurts