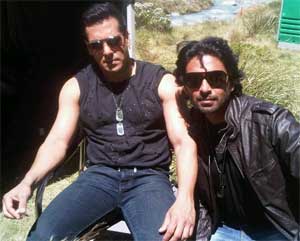 Rohit Khurana who essayed the angry young man Vansh in COLORS' Uttaran was recently on Cloud Nine after meeting his all time favorite idol Salman Khan.

We hear that they both met while shooting for a commercial ad for Mountain Dew.

When contacted, Rohit Khurana told us, "I was very much excited to meet the star and icon, Salman Khan. He is a very private person, so I could not get an opportunity to talk to him. I was just observing him and it was an awesome experience".

Talking about the ad he said, "We met at the Mountain Dew ad shoot; we were shooting for the same ad in the same venue. Salman Khan's ad campaign was for the North and I campaigned for the South. We shot at the Queen's tower over the mountain, and the only way we could reach there was thro' the rope".

Rohit Khurana will soon be back on the small screen as he plays the lead in UTV's new show for Star Plus, Dor. The show will be launching during the Valentines Week. "The launch of the show got delayed as the makers wanted a prime time slot. We are looking forward for the show to start".

As Rohit puts it, it indeed should have been a moment to cherish for him when he met the icon, Salman Khan!!

yipee 9 years ago oh cool gud for him...must be a great exp

geeta70 9 years ago salman is my hero too .
congrats rohit.
all the best for future project.

-Preeti- 9 years ago Awwwwww
So lucky .... and wishing Rohit best of luck for the Show Dor

Also waiting for this Ad to come

cjs369 9 years ago Very happy for you Rohit... you deserve all the success... All the best for Dorr... eagerly waiting to see u again on screen....