View Profile
Rohit Bal and Arjun Rampal are known for their strong bonding, both on and off the ramp. 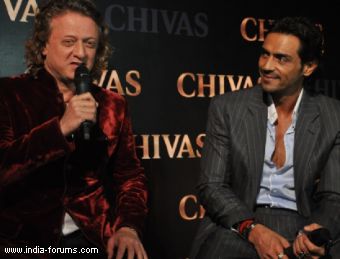 Now the designer has created a special outfit for the actor to give him a princely look for his maiden appearance at the forthcoming Cannes International Film Festival red carpet.

Confirming the news, Bal told IANS: "I can't disclose the design, but yes it will be an Indian look. He is going to be seen like a prince with no bling in the attire. The design will be super chic and I am confident that people will be amazed to see Arjun in Cannes this time."

Arjun, 39, will walk the red carpet at the 65th edition of the festival, starting May 16, as the brand ambassador for Chivas, official partner of the event. He will be accompanied by wife Mehr, a former supermodel.

Asked if he too would attend the cinematic extravaganza, the ace designer said: "No, I will not accompany him as I am doing four different projects, which is keeping me busy nowadays. Arjun is there with my designs, so that's Ok."

Bal is a name to reckon with in the Indian fashion industry. Known for mixing traditional and modern themes, he showcased his creations at global platforms in New York, Paris, and Singapore.

He also took care of Amitabh Bachchan's wardrobe for the fifth season of "Kaun Banega Crorepati" and for the upcoming edition of the game show.

"It's an honour to be felicitated with so many reputed names, both nationally and internationally. Mr. Bachchan has an aura, which is difficult to match and I am thankful that my clothes are justifying him completely," said the 54-year-old.