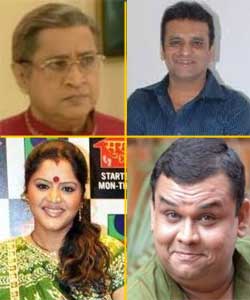 Tellybuzz was the first to report about Dharmesh Mehta coming with a sitcom on SAB TV which will be based on R.K.Laxman's novel.

We also hear that Honey Chhaya, will be essaying the main character of being a 'common man' in the show.

We tried contacting Shreya More but she remained unavailable for her confirmation.

Therefore we contacted Producer Dharmesh Mehta and he confirmed about the entire cast.

superclub9 9 years ago Dharmeshji, we wish you all the very best for your first show as a producer.We wish you a bright future ahead. All the very Best.

tulipbaby53 11 years ago Wow...I'm just glad that Priyanka is the bigger person!

-Preeti- 11 years ago well acc to me priyanka deserved the award totally ... she did a really commendable job in fashion ..... ash was good no doubts but priyanka had to take it this year

-Kookie- 11 years ago I think Priyanka deserved this award she worked hard for it, and I'm not just saying that cuz i a a big fan of her but she really did! She didnt decide her fans did b voting and stuff. If the he thinks ash should have won then thats great, but she doesn't deserve it cuz she didnt get the award! I watched jodaa akbar i dont think it should have won best movie, i didn't like it thought it was boring.

Shaina_b 11 years ago Well I think Ash did deserve the award more than Priyanka!!!!!

Ladoo645 11 years ago obviously the woman (jaya) wanted Aishwarya either way cuz shes her bahu...I swaer Ash needs to watch out or else actresS-actors will will refuse to work with him due to his bad attitude...and I bet Pryinka didnt even had a option out of this...

zainabkazmi62 11 years ago i luv pariyanka, ashu need to take a chill pill

delax 11 years ago he always does like that...i saw him doing the same thing in other award functions too when hosts' were making fun of film industry he got temepred and thought nothing is better than jodha akabar because it is the best..he is so wierd..

priyapiya 11 years ago This will go on 4ever....Lets see what will ashu do in the nxt award cermony.....Im getting used to it now after wat he has done in the past two award nites....He is in a news for something during these award nites....

khushboo_kzk 11 years ago Ashu I had one suggestion if you had so many problems with award functions either stop visiting award functions or starts yours owns awards and give whom you like either aishwarya or somebody else. you had created such a nonsense with farah and sajid in annual awards on star plus on some jokes which was not so seriuos matter but you take it so seriuosly.secondly ash has done a great job in JA she acted well. but priyanka was better than ash in fashion. because ash character was only in one shade in JA while PC was in different shade which is difficult to play.sentiments of jaya bachchan was because she was ash mother-in-law.and offering 12 songs to priyanka in upcoming movies he wants to direct another disasterous "SAWAARIYA"