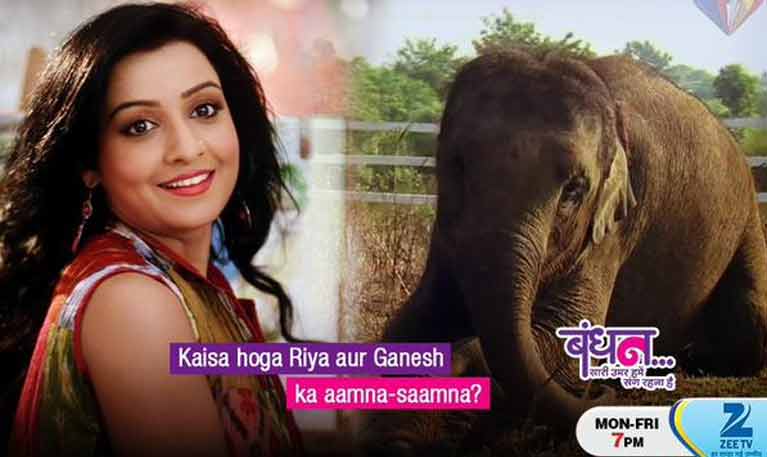 Swastik Productions' popular show Bandhan...Saari Umar Humein Sang Rehna Hai on Zee TV, delves into the story of an elephant and his bonding with the little girl Darpan (Ananya Agarwal). However, the show has taken a leap introducing new faces Raghav (Mrunal Jain) and grown up Darpan aka Riya (Chhavi Pandey) respectively.

The show is currently revolving around Raghav's revenge towards Riya and he is seen accomplishing his mission as their roka ceremony takes place.

Well, more drama is in store for the viewers in its forthcoming episodes.

Our source informs us, "Ganesha who is trying hard to regain his sister Riya aka Darpan's memory will finally succeeded. Yes, he will take her to a ground where she used to play a lot in her childhood with him. Riya will see the tree that symbolizes as Ganesha, where she used to pray for her family. Looking at that tree she will regain every single moment of her childhood and her real identity as Darpan. She will realize about Vishwas Rao being the murderer of her parents and will make her mind to take revenge from him."

"Alongwith after knowing her real identity, Darpan will agree to get married to Raghav. The duo will be seen taking the nuptial vows soon after the revelation," ends our source.

Will Darpan come to know about Raghav's intention behind their marriage!

To know more stay tune to this space.

+ 2
6 years ago Love Ganesh! Glad Darpan gets her memory back.

6 years ago Chhavi Pandey is giving her very best in the show, wishing her all the best.

8 years ago Veena is not in their league!! Just cos she got herself nude doesn't make her famous!!

+ 5
9 years ago ali,rahat,atif and adnan sami r surely ruling with their inputs...i personally wudnt put veena on the list along with these talented people..cos 1stly she's on a dif level 2 them and 2ndly she aint ruling @ all... she's jus talked abt cos of her nautanki during BB days which stil continues...

+ 5
9 years ago I definitely think these artists and more from pakistan have added so much to the industry! It really is great how Bollywood can be such a diverse melting pot!!! So thankful that we got such great talent!!! And even Veena Malik is indeed filling a role too - providing us entertainment with her antics and controversies! Every entertainment industry needs those ;)

9 years ago Well done Guys!its fantastic to c other people from other countries do well in Bollywood,and because Bollywood is so large it gives them a good platform to do well in there career!I am happy for Veena,I don't think there's anything wrong with wat she does.If people can like Rakhi they can accept Veena too!Good luck to her!

+ 2
9 years ago @larkipanjaban: duno abt others but i personally dislike veena because first of all she's way beyond item girl...shes done so much and does not admit it
and where all the other artists are making us proud she putting Pakistan's name in shame thats all, i hope i didnt offend u

+ 4
9 years ago i really like Ali zafar.He is so cute and handsome.and Rahat ali khan voice is awesome and his bollywood songs are also awesome.