View Profile
Youth entertainers continue to be in vogue. This is why 2008 would see yet another comedy hitting the marquee which is titled DE TAALI. The film stars a prominently young cast comprising of Aftab Shivdasani, Ritesh Deshmukh, Ayesha Takia and Rimi Sen and is aiming for a 20th June release. 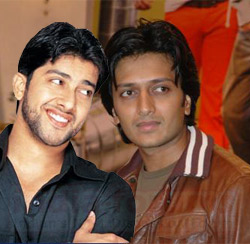 Featured Video
together. They created quite some 'masti' in Indra Kumar's MASTI 4 years back and though neither Mr. Ram Gopal Varma nor Ms. Antara Mali could help them gain at all from a debacle called MR. YA MISS (2005), Riteish and Aftab didn't mind saying DE TAALI to each other once director E Niwas extended his invitation.

DE TAALI itself has taken close to two years to reach the finishing line but to the film's credit, it still looks pretty fresh, young and happening with the delay not really causing any harm to the project. With ever so chirpy Ayesha Takia accompanying the two young men and Ms. Lucky Raima Sen (who has seen more successes than failures in her short but eventful career) completing the film's principal star cast, DE TAALI sounds like a lot of fun in the making.

Another attraction about the film is expected to be music by Vishal-Shekhar who have recently enjoyed the twin success of TASHAN and OM SHANTI OM.

With comedies seldom failing at the box office in recent times and audience more than willing to grab a bag of popcorn and laugh along with the jokes, DE TAALI is certainly going to make this summer cool!