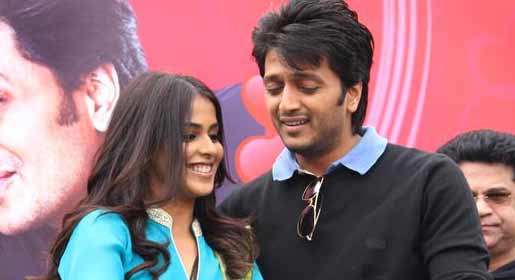 Actor-producer Riteish Deshmukh has popped the question to his wife Genelia Dsouza, again.

The actor had tweeted his photograph in designer Raghavendra Rathore's creation with the caption: "That was a great show @RRathoreCo."

Genelia, whom he married in 2012, replied to the tweet: "Hey Good Looking!! I think I have a crush on @Riteishd."

Then the "Ek Villain" star popped the question on the micro-blogging site.

He asked: "@geneliad will you marry me?"

To that, the actress said: "@Riteishd he he he Ofcourse but only because Riaan says you're the best dad in the world."

The star couple, who have starred together in movies like "Tujhe Meri Kasam" and "Tere Naal Love Ho Gaya", were blessed with their first child, Riaan Riteish Deshmukh last year.