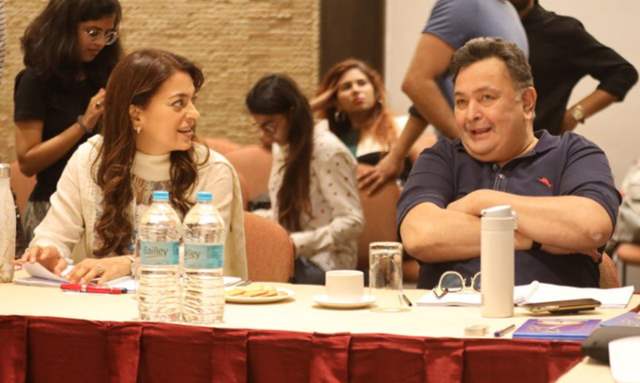 Veteran actor Rishi Kapoor’s two-year-long battle finally ended today, after he breathed his last on Thursday. His untimely demise on Thursday morning, a day after he was admitted to the Sir HN Reliance Foundation Hospital in Mumbai, has shocked and saddened the country.

The Kapoor family announced his sad demise with an official statement asking his fans that he’d want to be remembered with a smile, and not with a tear.

Currently, Rishi was working with Juhi Chawla for their upcoming film titled - Sharmaji Namkeen. Producers Ritesh Sidhwani and Farhan Akhtar are now committed to finishing the project, a major portion of which has already been shot.

The film will see Rishi in the lead role and Juhi Chawla as the female protagonist. A report in Hindustan Times claimed that the film was almost complete with a couple of days of shoot remaining.

A source has revealed, “Rishi Kapoor was the main protagonist of the film, and a major part of it was already shot with only a few days of shooting remaining for the actor. Being that it was Rishi Kapoor’s last project that was near completion, Ritesh and Farhan are determined to make sure that the film gets released.”

The source further shares, “The microscopic details of how Ritesh and Farhan intend to bring the film to completion are in the works but rest assured that the film will get completed and see a theatrical release.”

Produced by Excel Entertainment in association with Honey Teheran and Abhishek Choubey, Sharmaji Namkeen will mark Hitesh Bhatia’s debut as the director.

Juhi mourned the death of her co-star by writing a long message in his memory and talked about her good friend Chintuji.

Mohit Kumar: Surviving in Mumbai without work is tough; it's ...
39 minutes ago