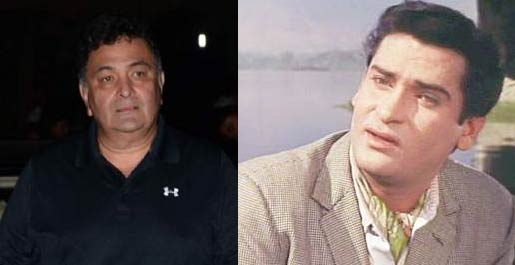 Veteran actor Rishi Kapoor is disappointed at the not appreciating his uncle and late actor Shammi Kapoor's contribution to Indian cinema, adding that a posthumous honour is still awaited.

"Ponder. My only resentment is that Shammi Kapoor never got recognised by the government in his lifetime. Posthumously would be great but..." Rishi tweeted late on Sunday.

The tweet comes after his uncle and actor Shashi Kapoor, who captivated attention with his charming looks and infectious smile, was conferred with the Dadasaheb Phalke Award on Sunday here.

It was the third Dadasaheb Phalke Award for the family -- the first was for Shashi's late father Prithviraj Kapoor and second for Shashi's elder brother Raj Kapoor.

The Kapoor brothers -- Raj, Shammi and Shashi, formed a trinity and dominated the Hindi filmdom.

With the gentle flick in the hair and his groovy dance moves, Shammi was often referred to as the Indian Elvis Presley by his fans. Known for films like "Kashmir Ki Kali", "Teesri Manzil" and "An Evening in Paris", he died on August 14, 2011 due to chronic renal failure.

Rishi went on to seek advice from the fans of the late cinema icon over the same topic.

"Then I think I am being too greedy! Is that what you all Shammi Kapoor fans and aficionados think? What songs what romance what macho what," he added.