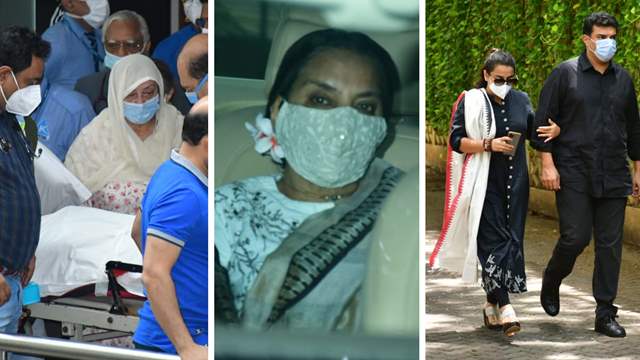 It is indeed a dark day for Hindi Cinema as legendary actor Dilip Kumar passed away on Wednesday in Mumbai. He breathed his last at the age of 98 and is survived by his wife, Saira Banu.

Dilip Kumar’s family friend announced the actor’s passing away through his official Twitter handle and friends and fans across the globe are now mourning the loss of the cinematic legend.

A visibly heartbroken and shattered Saira Banu can be seen making her way from the hospital as she carries her late husband Dilip Kumar’s mortal remains back home. Photos and videos from the hospital have come in and  the police can be seen forming a human chain to create a safe passage as the ambulance travels to Kumar’s residence.

Actress Vidya Balan with her husband Sidharth Roy Kapoor also arrived to stand by the family in these tough times.

Dilip Kumar’s funeral will take place today at 5:00 PM. Juhu Qabrastan at Santacruz Mumbai. He will be laid to rest with full state honours.

Prime Minister Narendra Modi also took to his official Twitter handle to mourn the loss of Dilip Kumar and shared his condolences as he tweeted:

“Dilip Kumar Ji will be remembered as a cinematic legend. He was blessed with unparalleled brilliance, due to which audiences across generations were enthralled. His passing away is a loss to our cultural world. Condolences to his family, friends and innumerable admirers. RIP.”

Dilip Kumar, real name Yusuf Khan, appeared in some of Indian cinema's most iconic films including Naya Daur, Mughal-e-Azam, Devdas, Ram Aur Shyam, Andaz, Madhumati and Ganga Jamuna. He created history with his career spanned four decades and will always be remembered as the gem of Indian Cinema.

May his soul rest in peace…