Star One's Dill Mill Gayye, produced by Cinevistaas will see a major twist wherein Riddhima (Jennifer Winget) takes the ultimate decision of signing the divorce papers, thus planning to get away from both the men Sid (Karan Wahi) and Armaan (Karan Singh Grover) who have messed up her life!! 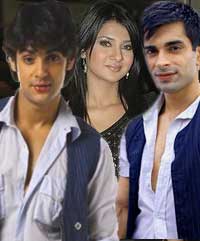 For the uninitiated, while Sid is all set to sacrifice Riddhima for Armaan, Armaan too has decided to move away from the couple for good. But in the process, both Sid and Armaan have hurt the feelings of Riddhima so much, that she is frustrated and wants to get away from their lives.

According to our source, "The coming episodes will see Riddhima eventually signing the divorce papers. She puts the divorce papers in an envelope and asks Armaan to give it to Sid. Sid is shocked to see the signed divorce papers, and he misinterprets things, feels that Riddhima is still in love with Armaan, and that is one reason why she has sent the papers thro' Armaan. But Riddhima does give a piece of her mind to both the men who have been playing with her life".

Just as the viewers get a feeling that Sid and Riddhima are on the verge of separation, Shashank (Mohnish Behl) will intervene and set things right in his own way.

"Shashank will be back on time, and he being the typical Indian father will want his daughter to give it her best shot for another six months or so, before taking the decision of getting divorced. Shashank will have a talk with both Sid and Riddhima where he requests them to give their marriage some more time. He also insists that just in the way in which Riddhima agreed to marry Sid because of her father, she should not take any big decision of divorcing Sid without her dad's consent", informs our source.

Will Riddhima and Sid stick to the words of Shashank and stay together?

Get ready to witness some gripping drama in Dill Mill Gayye.

8 years ago Mohnish Bahl as Dr Shashank was the soul of Sanjeevani !

+ 2
10 years ago i think the director of dil mil gaye is trying to show an example of this generation. and telling us that we should mov on in lifee. and you guys have to admit that it was aramaans fault he shouldnt have left ridhimma. ridhimma waited for a long timee. but at the end it all depends on ridhimaas decision. but armaan and ridhimaas jodi we cant forget? &lt;3

10 years ago AR deserve to be together... Riddhima should follow her heart and choose her love Armaan. In the last two and a half years, we have seen undying love of AR and also they've face more problems than happiness. They have gone through a lot of hurdles which make their relationship more stronger. Pls reunite AR

cute_desigirl 10 years ago arman and riddhima shoud be togather they look good togather and i wish the hole dmg old team come bck!!!! cuz is not that much fun how we have in old dmg but still karan rock love him!!:)