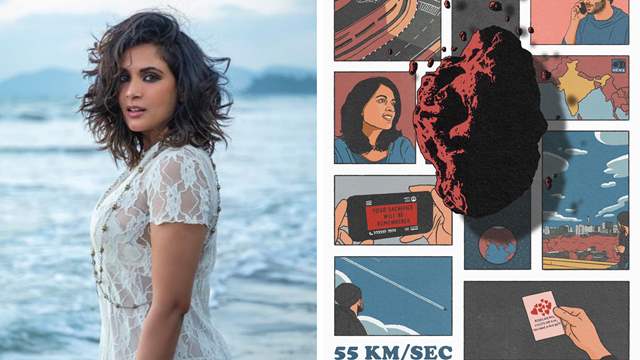 Shot on an iPhone amidst a global lockdown, sci-fi expert Arati Kadav, delivered a fine film in her newest outing. Best known for last year’s Cargo that wowed everyone upon dropping on Netflix in September last year, the filmmaker seems to have upped her game this time around shooting an entire film locked at home.

The film that rides on its high concept idea stars Richa Chadha in the lead part. Floored by Kadav's script, this was Chadha’s first project that she short during lockdown.

The film takes forward the idea of living in a world stricken with fear as it narrates the story of an asteroid that's about to hit earth. The film was earlier released internationally on Amazon Prime Video US and UK.

The filmmaker says, “I am thankful to Disney + Hotstar and ShortFilmWindow for showering the film with love. The film is called 55 km/sec which is the speed at which the asteroid is making its way to earth. As we’ve all acclimated to the new normal, the short film was a fun exercise. My team and I saw it as work to cheer ourselves up.  Our virtual set was bubbling with new energy. This was a memorable experience for us and I hope the audience showers us with as much love.”

Meanwhile, she is currently gearing up for her next release Madam Chief Minister, which is slated to release on January 22, 2021.