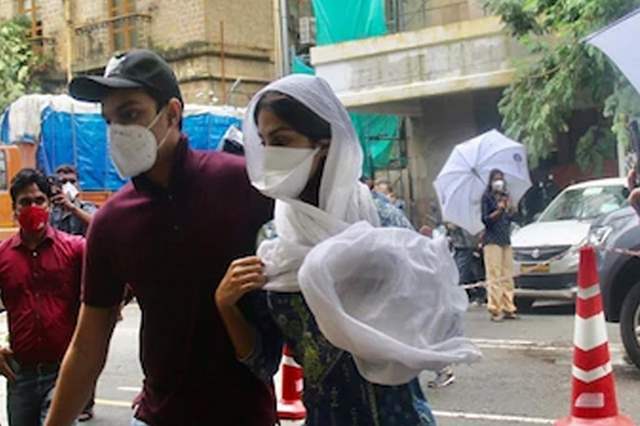 Rhea Chakraborty’s request for postponement of the summoning to record statements before Supre Court hearing was rejected Enforcement Directorate (ED) on Friday. Reportedly, the actress was summoned by ED today, and he has finally appeared to record her statements addressing the massive financial transactions done through Sushant Singh Rajput's account.

Clarifying about the rejection of plea, Rhea’s advocate Satish Manshinde said in a statement, “Rhea Chakraborty is a law-abiding citizen. In view of the fact that ED has informed the media that the request to postpone the attendance is rejected ... she has appeared in the ED at the appointed time and date.”

Rhea was spotted outside the ED office on Friday afternoon. Now, as per the latest report in Times Now, Chakraborty is seemingly behaving ignorantly about the details she has been asked about. She is said to be giving a standard response on the lines of 'I don't remember exactly' to the hugely important questions. Chakraborty's brother Showmik is also being questioned where he asked to bring documents in regards to he transactions made under his name from the late actor's bank account. According to Times Now, the interrogation is expected to go around till 8 pm tonight and, it might have just been over.

The news portal further claims that ED will be summoning the duo tomorrow as well. The reason behind the same is unclear.

subbammahars 1 months ago RGV's new story for his latest movie. Can't wait to watch it

My emotional memory helps me shape my character in Anupamaa: ...
9 minutes ago

Barun Sobti says his transformation for Halahal was 'a bit ...
11 minutes ago

The Kapil Sharma Show: Chandan Prabhakar talks about ...
58 minutes ago