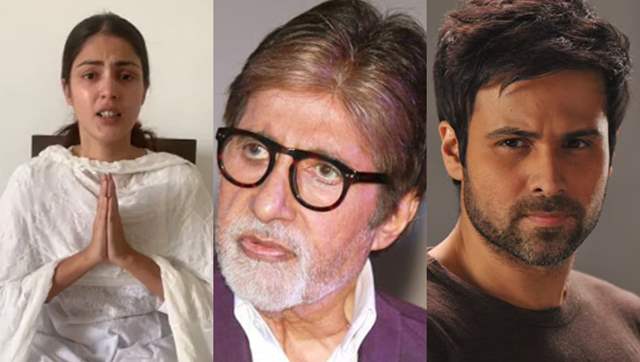 Emraan Hashmi, Amitabh Bachchan starrer Chehre which also stars Rhea Chakraborty playing the female lead opposite Emraan is nearing its release. The film which was earlier scheduled for an April 30 release has now been preponed for April 3rd release.

But, the biggest hurdle that has risen for the makers is, whether to allow Rhea to promote the film or not! Internal discussions related to this issue revolving film's promotional campaigns are going on in strong force.

As known to all, Rhea received bashing from many people across the nation and even from a bunch of people around the globe after late actor Sushant Singh Rajput's sudden death. She was at the vortex of a vicious hate campaign blaming her for SSR's demise.

After being arrested in the drugs case, Rhea is currently out on bail and has been maintaining a low profile since then.

While the film’s director  Rumi Jaffrey feels Rhea is ready to face the world, other well-wishers think she would be bombarded with awkward questions if she had to come out in public to promote the film.

As reported earlier, a few days back the teaser of Chehre was released and Rhea was yet again missing just the way she was from the posters.

A few weeks back director Rumi Jaffrey in his interview with had SpotboyE had revealed,

I have throughout maintained she’s an innocent victim. She and her family didn’t deserve this. Her father has served the country for years. I worked with her before all this (the tragic aftermath of Sushant’s death) in Chehre. I was going to shoot a love story in London with Sushant and Rhea for producer Vashu Bhagnani after the lockdown. But God had other plans.

In other development, the NCB has named Rhea Chakraborty amongst 33 others in a charge sheet they filed recently in regards to the Sushant Singh Rajput drugs case. The report also stated that apart from Rhea and her brother Showik, a few others are also accused in the case.

According to the report, the charge sheet also has statements of 200 witnesses. Thechargsheet is more than 12,000 pages in hard copy and about 50,000 pages in digital format have been submitted in the NDPS court by the agency.

We wonder if the makers land up to a conclusion letting only Mr. Bachchan and Hashmi promote the film. What do you think? Share your views in the comment box below.

2 months ago BW is messed up and is in severe need of cleaning itself!

2 months ago I hope that c*** gets dropped from this film. She is a criminal.

+ 6
2 months ago vicious hate campaign.. you disclosed your TILT with those words..remember sushant was made here..on tv and his tv fans are not going to forget that. and why so special favours for rhea. is she even that talented to deserve another chance. our tv actresses are way better than that ..WON'T CALL ANY NAMES. .. there was something fishy and all evidence gone. won't blame her but won't forgive her too. she is pathetic at acting so why bother

2 months ago Really so much support for Rhea by film fraternity. Remember people have not forgotten Sushant and will not forget him. Rhea should be punished for what she has done. Named by NCB, drug procuring and still support for her. Wow, guess drug addicts support drug addicts.