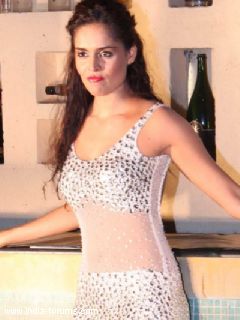 Ram Gopal Varma is launching Nathalia Kaur in Bollywood with item number "Dan dan" in "Department". Although the Brazilian model-turned-actress is thankful to the director for giving her the opportunity, she doesn't consider him her mentor or godfather.

"Ram Gopal Varma is not my godfather or my mentor. I am working with him just as Sanjay Dutt is working with him. We are working on projects together and that's it," Nathalia told reporters here Monday.

She was here to promote "Department" along with Rana Daggubati and Sanjay at the Leela Kempinski hotel. The film, which also features Amitabh Bachchan, releases May 18.

"I am an actor, I am playing a character in this song ('Dan dan'). It has been amazingly done. I am honoured to have got a chance to work with people like Sanjay, Rana (Daggubati) and Ram Gopal Varma," she said.

RGV has roped her in for his romantic thriller where Nathalia will play a lead role. She will team up with Rana Daggubati in the yet untitled film.