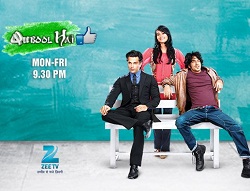 The word 'shaadi' is repeated too many times in many soaps, especially in saas-bahu sagas. Marriage is a beautiful union; nevertheless it is upsetting to often see the female leads of the show being obsessed solely about it. It seems sometimes that soaps are spreading the message that Indian girls are born primarily to marry and everything else in life is of lesser importance.

In Zee TV's Qubool Hai, it is a refreshing change to see a young a beautiful bride Zoya refusing to marry a groom who is way beneath her at the wedding. The misnomer amongst traditional Indians that everything will magically be set right after marriage (even if pressurized and between two incompatible people) which is sadly propagated in many soaps is boldly contradicted in Qubool Hai.

The channel and production house may have followed the herd mentality by setting Qubool Hai in yet another Hindu family. However the channel has dared to be different by setting Qubool Hai in Islamic families. We did have a series of movies set in Islamic families after Muslims were sadly persecuted after the terrorist attacks. However all of them were didactic in nature trying to hammer down the message that religious typecasting is wrong. Though the message was indeed valid, somehow many of these movies were depleted in artistic finesse as they got too preachy and repetitive in their message. Though Qubool Hai also aims at removing certain misconceptions about Muslim culture; it is the least bit didactic. This is because it beautifully explores Islamic culture rather than the religion. Muslims have after all contributed greatly to India, so it is great that finally we get to watch a unique show in Muslim backdrop.

Two brothers falling for the same girl isn't the main plot of the show. However it is evident that the diverse paths of Zoya, Asad and Aayan are destined to cross one another. The romantic angle is being developed steadily with finesse.

All the characters including the minor characters have been etched out well.  Karan Singh Grover lucidly emotes the angst his character Asad nurtures as his dad had left his mom for another woman. Rishab Sinha who looks charming in his curly mane plays with ease the sweet Casanova Aayan. Newcomer Surbhi Jyoti makes a spontaneous debut as the broad minded Zoya who though being rooted in culture will boldly oppose outdated customs. Vaquar Shaikh (who plays Rashid Ahmed Khan) despite not being old enough to play a father to grown up men, deftly slips into the skin of the character of a caring father. Shalini Kapoor Sagar plays the part of a dignified single mom (Dilshad) quite beautifully.

Without being the least bit melodramatic and a tear jerker, the show very artistically makes you feel sad at times. Moments like when Dilshad tells her son with great sorrow in her heart that even after so many years it deeply hurts her that she still doesn't understand for what 'mistake' her husband had left her and when Rashid goes on calling his Asad whom he has met after 17 years and deeply loves just to be rebuffed by his son; are beautifully poignant moments.

The costume design, art direction and cinematography of the show are commendable. The traditional Islamic outfits have been designed tastefully too. The mosque interiors are lavish and impressive. The cinematography stands out in its chiaroscuro. The Sufi songs that were played were heart rendering- we hope there will be more of them in future. The dialogues in Urdu Hindi give the show a different flavor.

Qubool Hai surely deserves to gradually dislodge all the other powerful shows at the same timing on other channels. If in mid December if we however see that its TRP isn't up to the mark it will show that Indian viewers don't want to sample a different show maybe just because it is set in a minority community. Its success may encourage serials set in other minority communities of India to be made.

6 years ago I liked Season 2 way more than Season 1. But as soon as the black magic came, the story changed a lot. It lost it's purpose. It was fine before Additi Gupta's character came. Additi is a great actress but her role/character was terrible. SaHil was the best thing about Qubool Hai. They were ym favorite couple. Karanvir Bohra and Surbhi Jyoti rocked!

+ 2
7 years ago Love surbhi jyothi...
Those were the golden and beautiful days of qh...
How i miss them...
There will be never a show like qh

+ 2
8 years ago wow qubool hai was so good in the beginning...the best show ever...but now everything has been ruined by the CVs...I miss those days
love Karan Singh Grover and Surbhi Jyoti...they totally nailed it...and they will always b remembered for their great performances in QH

+ 5
9 years ago Best show ever. Surbi jyoti an ksg are rocking it as asya!

9 years ago ASYA ROCKS. SURBHI JHOTI IS ONE OF THE BEST ACTRESS I HAVE SEEN...