View Profile
Well, after much hype about the newcomers in the movie - Aamir Khan's nephew Imran Khan, Genelia Dsouza the bubbling actress from the south, AR Rahman's music, and production by Aamir Khan himself, the dynamic combination finally did release, and boy was it a huge event! With interviews, guest appearences, and all sorts of promotions flying around, for around 3 days, all one could hear, was "Jaane Tu.. ya jaane na"! 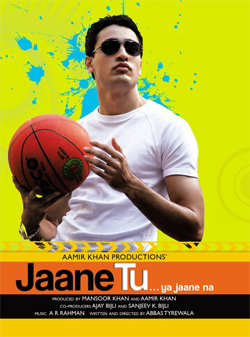 Featured Video
characters telling the story for us to hear, and from then on, believe it or not, there are 4 songs back to back - Kabhi Kbahi Aditi, Jaane Tu ya Jaane Na, Pappu can't dance, and Nazre milana. Really giving one a sense of being a musical, the story was told very well. The story is about Jai Singh Rathore, a rajput prince by birth, whose mother has made him swear not to ever resort to violence, and Aditi Mahant, who resorts to violence for anything and everything! Best friends for around 5 years, these two inseparables refer to each other as Rats (Jai) and Meow (Aditi). Their other friends Bombs, Shaleen, Rotlu and Jiggy as well as their parents, all know that sooner or later, these 2 will realise the love they have for each other, and tell each other. But the story takes a twist when Jai and Aditi try to find a pair for the other, resulting in a series of episodes of jealousy, anger and hidden yet beautifully shown love.

How the story progresses, what promises are broken, and what relationships made are for you to see! A special mention of the songs would be that AR Rahman has, as always outshone himself yet again with music ranging from a soppy ballad, to a peppy dance track and right down to the brilliantly popular "Kabhi Kabhi Aditi". A very good effort by the first time director Abbas Tyrewala, though the story line was nothing out of the ordinary.

Good acting performances were put up by Imran Khan and Genelia, both of whom were looking fantastic throughout the film with casual clothing and young fashion! This movie however, is not for all to like. The ones who had been waiting for it to release won't be disappointed, but the movie isn't a stunner or a directorial marvel. A good entertaining movie which will definitely be fun to watch with friends! Trust me, I saw it the day it released, with friends and I was not disappointed!