Zee's Shree has raised the curiosity level of audience with the spirit entering the body of Shree's cousin sister Bindiya (Madhurimma Tuli). However, there is much more to come tonight as Shree (Wasna Ahmed) comes face to face with the real spirit, Kangana played by Vibha Anand. 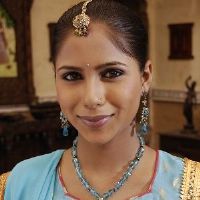 Featured Video
As per our sources, "Tonight's episode is going to be highly dramatic where Kangana's face will be revealed finally. However, her relation with Hari and the Raghuvanshi family will be kept under wraps".

Elaborating on Kangana's entry, our source adds, "She comes out of Bindiya's body just to divulge her identity. But Bindiya will be still used as a medium by Kangana, as she is a spirit and cannot do many things without an intermediate force".

Her identity will come to the fore in the future episodes. And as Telly Buzz had earlier reported, Kangana's character is similar to the role of Urmila Matondkar in the movie, Pyaar Tune Kya Kiya.

"Kangana used to live in a place where Raghuvanshis had a bungalow called Mehasani Palace. Opposite their palace, stayed the Mehta family of which Kangana was the only daughter. The girl happens to be psychic where it is very difficult to predict what she will do next. She can go to any extent to achieve whatever or whoever she wants. The story line will reveal how possessive she was about Hari (Pankaj Tiwary) and will slowly open up the relation which she shared with the Raghuvanshi family. However, it will take quite some time for this part of the story to unfold", explains our source.

With the spirit finally making her entry, we hope the story line is gripping enough to hold the audience!!

Watch the entry of Kangana tonight in Zee's Shree...

13 years ago thanks. look forward to seeing that episode. will enjoy it more im sure once the spirit no longer uses bindiya as an intermediate force.

+ 6
13 years ago Finally...they will reveal her.Was waiting for her entry for so long.
Thanks.

+ 6
13 years ago finally ....but still i wanna know what exactly was her relationship with Hari and family

+ 5
13 years ago Definitley Needs to Watch this Episode !
Shree Just Rocks, The show is amazing ..