BollyCurry is back with a bang; presenting to its readers a movie that has gunshots banging throughout the entire film. A 1978 blockbuster, Don is a movie you're least likely to forget. As popular as it is, the movie has some interesting facts that shall be unraveled today.

The third highest grocer of 1978, Don is fondly called the Golden Jubilee Movie of the Indian cinema. The movie was directed by Chandra Barot and produced by Nariman A. 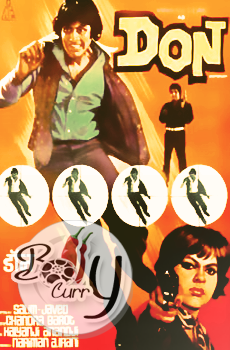 Don is the story of a very powerful criminal (Amitabh Bachchan), who despite being wanted by the police of 11 countries is obscure to them all. He has numerous enemies given the nature of his work, be it policemen, his rivals, and sometimes his own men. One such man, Ramesh, is killed by Don when he wants to quit. Ramesh's fiance (Helen) dies in the process of avenging his death. Then Roma (Zeenat Aman), Ramesh's sister jumps into this fire to avenge the death of her two dear ones. Things take a surprising turn when situations become tricky, and Don is replaced by his look-alike Vijay, an informant of the police. Things get complicated when the only officer who knew about Vijay's real identity dies. The happenings when Vijay is cornered by the police and his men, owing to the identity crisis, are what make the movie a must watch.

BollyCurry is now signing off until next time, when we shall be back with another movie that shall boggle all minds.