BollyCurry returns this week with yet another retro view of a critically acclaimed film from the 90s! Today's review is about a National Award winning film which redefined the concept of love and its sacrifices. Hum Dil De Chuke Sanam is a film that is said to be one of Sanjay Leela Bhansali's masterpieces, and to this day, the movie is fondly remembered by movie-buffs and critics alike.

Hum Dil De Chuke Sanam, or HDDCS as it is more commonly known, released in 1999 under the SLB Films 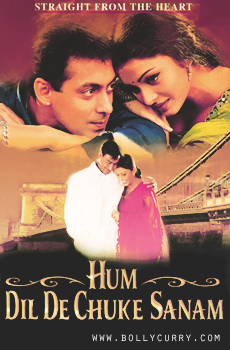 banner, and was directed and produced by the talented writer-composer-director-producer Sanjay Leela Bhansali. The movie starred extremely talented and popular actors from the film fraternity including Aishwarya Rai Bachchan, Salman Khan and Ajay Devgn in the lead roles, while Zohra Sehgal, Vikram Gokhale, Smita Jaykar made up the supporting cast. The movie even included a cameo by the beautiful and talented Helen.

The story revolves around the beautiful daughter of Pandit Darbar, Nandini (Aishwarya Rai), who is more educated and liberal in her views as compared to her siblings. Then enters a young Indo-Italian aspiring musician, Sameer (Salman Khan), who wishes to learn Indian Classical Music from Pandit Darbar. Darbar agrees to let him stay at the family's house and learn music, and takes a promise to repay his tutelage whenever he asks for it. In the midst of festivals and weddings in the Darbar household, Nandini and Sameer fall in love and dream about their future together. The two are caught rehearsing wedding vows by Darbar, who asks Sameer to repay his tutelage by leaving his house and staying away from his daughter. Sameer doesn't leave the country immediately, but stays around town and writes letters to Nandini, which doesn't reach her on time. Around the same time, Nandini's parents arrange to get her married to Vanraj (Ajay Devgn), who had fallen for Nandini during her cousin's wedding. On their first night together, Vanraj is frustrated by Nandini's indifference to him and catches her re-reading some of Sameer's letters.

Initially furious for not knowing the truth, Vanraj decides to sacrifice his love for his wife's happiness, and promises to take her to Italy to unite her with Sameer, despite his family's objections. The two set off for Italy in search of Sameer, where they come across many hurdles and dead-ends. Whilst searching for Sameer, Nandini comes to see Vanraj for the caring and loving person he is, and begins to develop a newfound sense of respect for him. Vanraj comes across Sameer's mother, and arranges for Nandini to meet and reunite with Sameer on the night of his debut concert. When Vanraj does drop Nandini off at Sameer's, she introspects and reflects over her entire trip with Vanraj and realises that he is her true soulmate. She apologizes to Sameer and tells him the same, and runs off to Vanraj to hug him. It is implied that the two reunite and return to India.

Hum Dil De Chuke Sanam was well liked by both, critics and audiences alike, for its emotional appeal, unique story-line, beautiful cinematography and the stellar performances from the actors. It was the highest grosser of 1999, with a net collection of 20 crore rupees in the domestic circuits and 8.5 crores in the international circuits. The film won 3 National Awards and more than 20 other awards in various award ceremonies such as the prestigious Filmfare and Screen Awards.