BollyCurry is back with the next edition of Retro Review, and this time we bring to you a romantic movie which still rules the hearts of many movie buffs and was a superhit in its own time. Dil (1990), is one of the most iconic films of its times, and it went on to become a game changer for its lead actor, Aamir Khan, and its director, Indra Kumar.

Released on 22nd June, 1990, Dil was the highest grossing film of the year. It starred two of the most popular stars of Bollywood, Aamir Khan and Madhuri Dixit Nene as leads, whose chemistry blew everyone's mind. The two of them 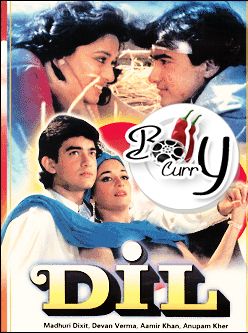 were also supported by talented actors like Anupam Kher, Saeed Jaffrey, Sarita Joshi, Shammi and Deven Verma. This movie marked the debut of Indra Kumar as a Director, who went on to deliver many critically and commercially successful movies like Beta, Ishq, Masti etc.
Dil is a story of two lovers Raja (Aamir Khan) and Madhu (Madhuri Dixit Nene) who had to go through various ups and downs to be together. Raja was the son of a miser Hazaari Prasad (Anupam Kher) who saw his son as a tool to gain money in the form of dowry by getting his son married to a rich girl, but Raja wasn't interested in his father's ulterior plans. Madhu was the daughter of a rich businessman Mr. Mehra (Saeed Jaffrey), whom Hazaari Prasad wants to con by setting himself up as a rich businessman so that Madhu gets married to Raja. After a lot of fights between Madhu and Raja and their fathers, the two fall in love and leave their families to tie the knot. The two live in marital bliss for a while till disaster strikes in the form of an accident, where Raja is rendered critically ill. Madhu rushes to her in-laws to ask for monetary help, who only agree to help her on the condition that she leaves him for good. The rest of the movie revolves around Madhu's decision and the repercussions faced because of it, and how do the two lovers finally unite.
The selling point of Dil is that this movie had all the elements of a quintessential Bollywood movie: romance, comedy, drama and tragedy. It boasted of an amazing script, delivered by some of the best actors of Bollywood. The comic scenes were enhanced due to the excellent comic timing of actors while the dramatic scenes were the highlight of the movie thanks to amazing performances by the talented cast.
The music of Dil is such that even today, people still remember its songs. It is one of the few movies in which every song was just as popular as the next! While "Mujhe Neend Na Aaye" is a love song and also the most popular song from the movie, "O Priya Priya" talks of pain, separation and anguish, sung by the immensely talented  Suresh Wadkar and Anuradha Paudwal. "Humne Ghar Choda Hai" and "Hum Pyaar Karne Waale" are songs about the lovers rebelling against their fathers, while "Dum Dama Dum" and "Khambe Jaisi Khadi Hai" are college based songs, filled with funny lyrics and music which will surely force you to groove along with the actors. All in all, the songs of this movie are a must for your music library. The songs are composed by Anand Milind and lyrics have been penned by the skillful Sameer.
The movie was critically acclaimed, earning Filmfare nominations in the category of Best Actor (Male and Female), Best Music Director, Best Film, Best Director and Best Supporting Actor (Male). However, due to the cut-throat competition with other popular films of the year, only Madhuri Dixit won the award that year for the Best Actress.
Did you know?
Needless to say, Dil is touted as one of the best movies of Bollywood till date with impeccable cast, lovable songs and excellent plot. If you have yet to watch this movie, then watch it for the sizzling chemistry of the leads, melodious songs and fast paced story with a heartwarming end.
Writer: Kalpana K.C.
Editors: Ritchelle C. and Gunia K.
Graphics: Komal P.
Do you have a suggestion or comment for BollyCurry? Drop us a PM at BC_Dropbox today.