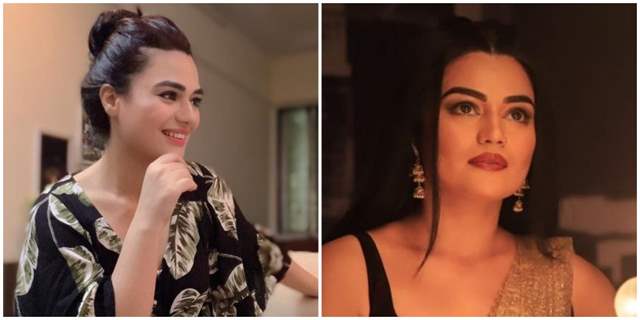 MX Player is now bringing viewers a Hungama Original – Ratri Ke Yatri, a web series with 5 different stories that witnesses hard-hitting life truths unravel when each character finds himself visiting a brothel for the first time in his life. This single night changes their outlook towards their family, society, lover, and themselves.

We at India Forums got in touch with Renee Dhyani who will be seen in a prominent role in the series. She spoke to us about the series, her character, challenges faced and much more.

1.     First of all, tell us something about your role in the series and how did you adapt to the character?

The web series ‘Ratri Ke Yatri’ revolves around one location where there are five different stories of five different women. They are all from the red light area and how that one night changed their lives will form the crux of the story. It will revolve around a female who is into prostitution and how that one night changed her life and her way of thinking, boldness and everything.

2.     What is the one thing about the series which compelled you to say yes to it?

I've always wanted to do something which is related to women. Being a women, somewhere you know that you’re a subject. I’ve grown up in such a society where I keep seeing such things where the women have suffered and been through things. I always want to do something which is so subjective that when we read the content, it attracts us towards it. I didn’t say yes to it because it’s about a story of a woman or a Superwoman.

I declined the offer of four web series prior this where I knew that I was a part of the show but as a character, I was unaware of what I was doing in that particular series. I don’t want to be a standing property and play as an object for anyone. So when they approached me for this, there was content, there was subject, there was bold subject. So when you are getting so much on one plate and you’re getting to work with one of your favourite director then I thought that I should do it for my guru, I should do it for my mentor.

3.     As you also mentioned that it’s such a strong character and it also highlights the difficulties of women. So did you face any challenges while portraying this character on screen?

Not really, because I was shooting 'Yeh Teri Galiyaan' at that time. For the promotion of the show, I went to Kolkata where I met the ladies of Sonagachi. I thought that maybe I should get a little bit of idea of how these girls or women react. I don’t find them different, they are like us only. I couldn’t differentiate them. It wasn’t that difficult for me to play this character because I was already doing a show which was based on them.

4.     Because of the lockdown, the release of many shows including this have been delayed. So did that impact you and how did you manage to spend your time in the lockdown?

So, the delay of the series was also difficult for me because I wanted to give the projects that I've signed for the future only that much duration that I want. I’ve been working from past two-three years like anything, so there was no vacation for me. When I left ‘Yeh Teri Galliyan’, I had to shoot for this series. I shot this web series and I thought that maybe it will release in next 1-2 months and then I’ll sign the next project because you get busy in promotions and other work.

But when this went on hold, it was a difficult time for me. So during that time, I started my road journey. I went to Dehi by road and from there the entire Uttaranchal like Dehradun, Rishikesh, Haridwar and after that I came to Mumbai. As soon as I returned to Mumbai, the lockdown was announced. Initially, I thought that okay, the lockdown will be for 20-25 days.

During that time, my inner cook, painter, poet, all woke up and I started writing, painting and many other things. It was a big fall for an artist. I have no idea about other artists, but being an outsider when you’ve left your home to come to Mumbai to fulfill your dreams and if this type of incident happens then it’s like a big fall. So it’s a very tough time for all of us.

I’m going to share one of my very big project and good news very soon with you guys. However, I want to concentrate on 'Ratri Ke Yatri' as of now.

Did you know Mallika Singh is related to this 'Dill Mill Gayye' Actor?

Sanjay Dutt’s Lung Cancer is on Stage 4; Heartbreaking ...
36 minutes ago

Ali Asgar and Vishal Kotian to team up after 22 years for ...
an hour ago

Gulki Joshi: I can understand the stress the cops go ...
2 hours ago