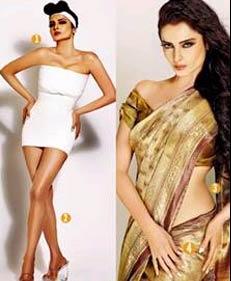 
Yoga and aerobics under the coaching of Ramma Bans transformed a gauche Rekha into a diva during the '80s. Along with remarks by critics with the use of words such as 'flawless' and 'sexy' to flatter the actress. It's no wonder that Rekha became a superstar with good looks to match! However since that time, rumors spread claiming that the actress had gone under the knife at various phases of her life.


Rekha, in her defense stated repeatedly that it is in fact yoga, reading, healthy eating, and good sleep that has kept her in top shape until now. But, to Rekha's dismay, some recent pictures seem to be saying otherwise.


The actress's latest clicks, by photographer Jagdish Mali, in Filmfare magazine have created a buzz in Bollywood. These newly released photographs seem to show flawless, young skin and a face of Rekha that could easily be misunderstood to be from her old 70's and 80's movies. It seems as if the 56-year-old is out to give some serious competition to actresses who are young enough to be her daughters!


So, what does it really take to keep looking like that? Following the shoot Mali remarked, "When we shoot digitally, a little bit of touch-up here and there is necessary. I've just made minor changes to the images' haven't tampered with her figure at all!" he claims. He also added, "We know she's been maintaining herself well. When you're young at heart, it reflects on your face."


A bit contradictory maybe, but surely we all know what the truth is.
10 Likes