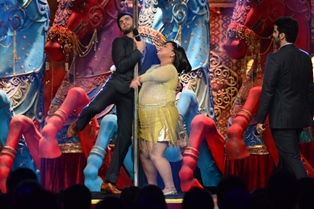 t was time for some Gundaraj on Sony TV's Comedy Circus Ke Mahabali when Gunday Ranveer Singh and Arjun Kapoor made a special appearance to promote their upcoming flick. Ranveer as always was in his exuberant best while Arjun was a witty parallel!

Together they giggled, boogied and mimicked the who's who of Bollywood leaving everyone in splits. Be it the signature pose of King Khan, the famous towel dance of Salman Khan or killer moves of Hrithik Roshan, all were under the scrutiny of these extremely talented men.

Ranveer Singh who had been on this popular show earlier as well couldn't wait to get onto the stage yet again and surprise not only the judges but the audiences too. Both were at their mischievous best when they put on a show and did an extremely sensuous pole dance with none other than - Bharti Singh. And the showbiz continued with the Gunday 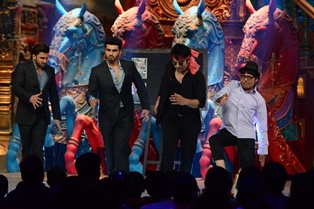 duo matching garba steps with Purbi Joshi and Mantra. Ranveer was elated to see Poorvi making a comeback on the show.

That's not all! Ranveer was in for a pleasant surprise when comedians Balraj and Rajeev mimicked his romantic scenes from his last- Ramleela. The duo left no stone unturned to ensure that they embarrass him to the core.

Yes you heard it right, there's a new serial kisser in town and it is none other than the naughty actor Ranveer Singh who made an appearance on Comedy Circus to promote his upcoming movie Gunday. The episode will have Rajiv Thakur and Balraj presenting a hilarious act on Ranveer's smooching scenes in the movie Ram Leela. After watching this hysterical act, Ranveer will make his way to the stage and jokingly beat Balraj on his bum.

Arjun too will be seen joining in on the fun and pulling Ranveer's leg by saying, "After watching this act, Emraan Hashmi will feel very bad. You have surpassed him."

Get ready to watch the rib-tickling acts with Gunday- Ranveer Singh and Arjun Kapoor on Comedy Circus Ke Mahabali.

Looks like we have a new serial kisser in the market!