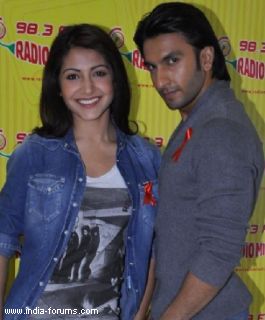 Ranveer Singh is ready with his second film 'Ladies vs Ricky Bahl', in which he plays a conman and dupes girls. The actor says that he is the same in real life too.

'Many, many girls, but it's not that I have not been on the receiving end. As many girls as I have duped, I have been duped as well. So, I know how it feels to be on the other side,' Ranveer said while promoting the film at Radio Mirchi studios.

'All this happens in boys vs girls, male vs female... in interpersonal interactions it keeps happening. Sometimes you 'thago' a girl and sometimes she does. In the matters of heart, everything is fair,' added the 26-year-old who debuted with 'Band Baaja Baraat'.

Anushka Sharma, who worked with Ranveer in his debut film, feels her co-star's charming ways help him in having his way with the girls, both in reel and real life.

'He is very charming no doubt, so it's easy if he wants to. He is quite naughty...he is 26 and he has tasted so much love and stardom. I think this is his time to enjoy and take in all the female attention and laugh it all up. In the film, he is making most of that I guess,' said the 23-year-old actress who tasted success with her very first film 'Rab Ne Bana Di Jodi'.

The film is believed to be inspired by 2006 Hollywood hit 'John Tucker Must Die'.