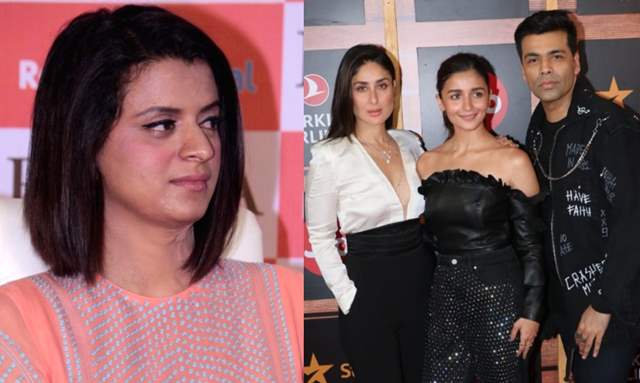 Currently, the annual Mumbai Film Festival is in full swing and the audience has been excited to see their favorite Bollywood stars discuss films on the podium. However, unlike every other year, 2019’s MAMI saw a change in discussion which nowhere hinted towards films but rather it was about personal relationships.

Now, Kangana Ranaut’s sister Rangoli Chandel pointed out that, while MAMI had invited Karan Johar, Kareena Kapoor, and Alia Bhatt for closing discussion they talked about their personal relationship and how they have turned film festivals into kitty party.

Also read: Kareena has the Cutest Reply to Alia-Ranbir's Marriage; Alia speaks about Bebo being her Sister-in-law

The festival ended with a panel discussion which saw Karan, Alia, and Kareena. The trio talked about Alia’s relationship with Ranbir as Karan asked the Raazi actress if she had ever imagined that there would be a day that? Kareena might be her sister-in-law considering she is dating Ranbir Kapoor.

Kareena revealed that would be the 'happiest' if Alia became family. While Alia dodged the question, Karan added, "Whenever it has to happen, both Kareena and I will be exceptionally happy and we’d be standing there with a thaali."

Meanwhile, the discussion did not go down well with Rangoli and the next was totally inevitable. She took to her twitter handle and lashed out on the three as she wrote: "Pehle award shows ko aur ab film festivals ko bhi kitty party bana diya."

Now, the audience has been waiting for the Bollywood stars to reply to Rangoli’s tweet.

On the work front, Kareena Kapoor Khan has two films in the pipeline which include Good News that also starrs Akshay Kumar, Kiara Advani and Daljeet Dosanjh. Apart from that, she is also gearing up for Angrezi Medium. Meanwhile, Alia Bhatt was recently spotted shooting for Sadak 2 in Mumbai.