Ratan Rajput who portrayed the iconic character of Laali in Zee TV and Swastik Pictures' Agle Janam Mohe Bitiya Hi Kijo has always been vocal about her liking to wearing simple and homely attire in reel life. However, the actual scenario of Ratan's style funda is very much different in her off screen life.. 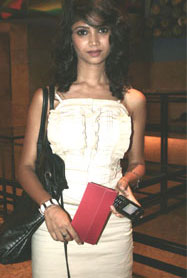 A source from the industry tells us, "You can expect the unexpected when it comes to Ratan's informal dressing style. She has a very unique way of dressing that might give nightmares to many".

The unit of Zee TV's Sanskaar Laxmi was a witness to one such wardrobe funda of Ratan.

If sources are to be believed, Ratan made her presence to greet Laxmi (Veebha Anand) on her Mehendi nite in a very informal get-up. Even though she got into the attire of Laali for the shoot, her dress sense caught everyone's eye. She made her own fashion statement looking tremendously hot in a red colored frock. But to the surprise of all, she wore a red colored slipper in one leg and a green chappal in the other, and that too intentionally".

We caught up with Ratan to ask her about her crazy ideas when it comes to dressing and she says, "I love to wear colourful attires and accessories, and what you witnessed in the set of the Sanskaar Laxmi was one such stunning combination. I am not that fashion crazy, but love to mix colors when it comes to my accessories and slippers. I use a combination of colors depending upon my mood. I have various coloured slippers like green, red, yellow, blue, pink, purple etc. You name a color and I have it, except for black".

Does this mean that the dress rehearsal for her Swayamvar on national television is already on? Take a note guys, it just needs you to be at your 'colourful' best  to win Ratan's heart..

shivani003 9 years ago If wearing odd coloured footwear is called a fashion statement then thank god Iam not fashionable ;)

SilverBell 9 years ago Wow love her dressing so much. she is the best.

Lata 9 years ago LOL....these days any weird STYLE is a Fashion statement...

naina_raina 9 years ago Seems to be aping Helena Bonham-Carter's look at the Emmys :)

amurocks 9 years ago Lol...all the telly stars have their own style statement. Ratan Rajput is a pretty lass and im sure she'll make it big here. For more gossip and news on your favorite stars visit zingtv website

pinkmermaid 9 years ago she's no doubt a very gud actress.but dunno why is she doing these crap shows like Swayamvar!!

Pirated_Fun 9 years ago Ratan is a great actress , She may be LAALI for all , but for me she always be RUCHI

Rakul Preet Singh confesses to being a part of drug chats ...
3 minutes ago