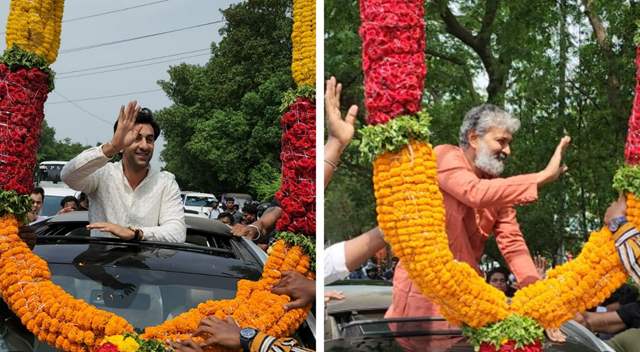 The era of big ticket films coming in and creating a stir at the theaters is currently the best possible occurrence. With RRR and KGF Chapter 2 doing astronomical numbers, this upcoming week will witness two more big ticket films like Vikram and Samrat Prithviraj locking horns.

And amidst this, if there is one other film that is supposedly the biggest ever to be made in Bollywood, it is Brahmastra.

The film has been in the making for the longest time as we already know and after being delayed for umpteen number of times, it will finally see the light of the day in the next few months.

And hence, the makers and stars of the film are leaving no stone unturned in an attempt to make sure the buzz and excitement for the film is real. On that note, leading man Ranbir Kapoor, director of the film, Ayan Mukerji and their supporter and legend, SS Rajamouli were recently seen arriving in Vishakapatnam to promote the film.

The fans were obviously in abundance and they couldn't stop cheering as the superstars came in.

Apart from Kapoor, the film also stars Alia Bhatt, Amitabh Bachchan, Mouni Roy and Nagarjuna in important roles. The film is said to be a trilogy where the first one is called Brahmastra - Part One: Shiva. It is set to release on 9th September 2022.