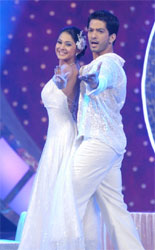 Surprises seem to flow incessantly on Zara Nachke Dikha… Unleashing yet another revelation in a forthcoming episode, audiences will get a triple treat as the heart throb Ranbir Kapoor, the graceful Deepika Padukone and the charming Minnisha Lamba, step in to make the nation groove to the tunes of Bachna Ae Haseeno.

But what amazes Ranbir Kapoor and Deepika Padukone is the striking performance of Amit Tandon and Jennifer Winget in the Hum Tum round where they performed on Ranbir’s favorite track ‘Khuda Jaane’ from the movie Bachna Ae Haseeno. Their performance wins the maximum appreciation from both of them as well as the judges. Ranbir & Deepika were so floored by their performance that they said both of them performed better than what they did in the song! An elated Ranbir said, “Your performance was an amazing blend of, dance poses, gestures and expressions”.

All this fun, masti and dhamaal of star-studded ‘Performance Episode’ will be aired on Monday, August 11 at 9.30 pm
Featured Video

+ 3
14 years ago Indeed, Jenni & Amit looked like they're in love. Beautiful portrayal. Hats off! I haven't seen such beautiful act in any of the dance shows so far.

+ 2
14 years ago They both r cute..But Chaitanya wud be more appropriate with Jenny... lol!.Will definately Watch..BAH & ZND Rock!!

14 years ago thanks! wow... they are everywhere promoting BAH... can't wait to see the episode!!!

+ 2
14 years ago wow looking forward to their performance

+ 3
14 years ago Awesome!..Amit & Jennifer have always been my crossover jodi!..can't wait to see them!